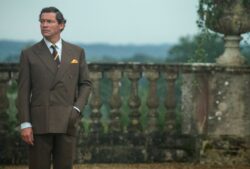 Dominic West has confirmed that the upcoming series of The Crown will actually feature ‘tampon-gate’, as the story of then-Prince Charles’ divorce from Princess Diana continues.

The hotly anticipated series will return next month and will see West take on the role of King Charles III, Elizabeth Debicki as Princess Diana, and Imelda Staunton as Queen Elizabeth II.

We already know that the new series will feature Princess Diana’s infamous Panorama interview of 1995, and another scandalous moment has also been confirmed.

For those who don’t know, in perhaps one of the most infamous moments in the royal family’s history, a secret recording of a phone conversation between Charles and Camilla (while he was married to Princess Diana) uncovered him telling her that he wanted to be her sanitary product…

Yep, you read that right.

The tape allegedly included the then Prince of Wales saying: ‘Oh God. I’ll just live inside your trousers or something. It would be much easier!’

It was a scandal that made it into the history books (Picture: Stuart C. Wilson/Getty Images)

‘Or, God forbid, a Tampax. Just my luck,’ Prince Charles is said to have joked back.

While it had previously been thought this moment wouldn’t be making it into the hit Netflix series, West has said it will be taking place, having re-enacted the phone call with Olivia Williams who plays Camilla.

Imelda Staunton will be taking over from Olivia Coleman as Queen Elizabeth (Picture: PA)

He added to Entertainment Weekly: ‘I remember thinking it was something so sordid and deeply, deeply embarrassing [at the time].

‘Looking back on it, and having to play it, what you’re conscious of is that the blame was not with these two people, two lovers, who were having a private conversation.

‘What’s really [clear now] is how invasive and disgusting was the press’s attention to it, that they printed it out verbatim and you could call a number and listen to the actual tape.

‘I think it made me extremely sympathetic towards the two of them and what they’d gone through.’

Josh O’Connor, who played the future King in the third and fourth series, previously revealed that he had been told the scandal in question wouldn’t be shown during the early stages of the casting process.

‘When they offered me the role, one of my first questions was — I say questions, I think it was pretty much a statement — ‘We are not doing the tampon phone call,’ Josh began.

The actor admitted that he objected to the scene as it meant it would ruin one of the few roles that he hasn’t embarrassed his parents with.

He added to E! Online: ‘This was my one chance for my parents to see something with no shame and there’s no way I was going to scuttle that by talking about tampons on Netflix.’

The Crown will be available to stream on Netflix from November 9.

It was a scandal for the history books.