Doctor Who showrunner hits back at ‘woke’ criticism: ‘The world has changed, not the show’ 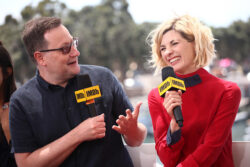 Chris and Jodie are bowing out together (Picture: Tommaso Boddi/Getty Images for IMDb)

Doctor Who showrunner Chris Chibnall has hit back at criticism that the BBC show has become too ‘woke’.

The writer is stepping down as showrunner after Jodie’s final upcoming special, The Power of the Doctor.

But during his reign, he’s faced various criticisms, including that the show has become too ‘political’ or too ‘woke’ – despite the fact that Doctor Who has always tackled current topics, with returning showrunner Russell T Davies hinting that climate change will have a bigger prominence in his upcoming series.

‘I think the world has changed, the show hasn’t! They should go and have a look at some of the past episodes,’ Chris told Metro.co.uk.

‘It’s a show of great empathy and humanity and tolerance and always has been, right from the start. I have nothing to say to that! It’s a mad old comment.’

Chris added that he’s fairly used to criticism, having helmed shows like Broadchurch.

Jodie will make her final appearance in The Power of the Doctor (Picture: BBC Studios/Ben Blackall)

‘I was prepared for it. I’ve done Broadchurch so I know what it means to do a big show and to be criticised. It’s just par of the course. You can only be the writer you are and you can only be the showrunner you are so you make the show – I haven’t been on social media since 2015 and you really just have to do the work that you believe in.

‘I really believe in all the stories we’ve told. The general truth about Doctor Who, and indeed all television and film, is some people like it and some people don’t like it and there is endless debate about it.

‘So you do the work that you believe in as best you can and you try not to get caught up in it. The reactions are legimitate and everyone’s allowed to have an opinion, but you can’t let it affect the work.’

Before Chris steps down, Jodie Whittaker’s 13th Doctor will face her final adventure, battling the Daleks, the Cybermen, and the Master (Sacha Dhawan).

He told us of the 90-minute epic: ‘It’s a huge, epic, fast roller coaster ride of an episode. It’s probably the biggest episode of Doctor Who we’ve yet made. It features the return of Tegan and Ace from the classic series of Doctor Who, Janet Fielding and Sophie Aldred who are phenomenal.

‘It has an evil trio of monsters – the Daleks, Cybermen and The Master, played by Sacha Dhawan. And Sacha playing the Master as you’ve never seen him before in Doctor Who. It goes all across time and space, it’s connecting the past, present, and future of Doctor Who, it’s very exciting, it’s funny, and there will be tears at the end of the 13th Doctor.’

The Power of the Doctor will air at 7:30pm on BBC One.


MORE : BBC marks 100 years of broadcasting across the nation with special programming from shows including Doctor Who and Strictly Come Dancing

‘It’s a show of great empathy and humanity and tolerance and always has been.’