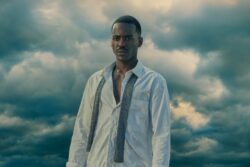 Ncuti Gatwa is set to star as the 15th Doctor (Picture: BBC Studios)

Doctor Who has offered a first glimpse at Ncuti Gatwa as he gears up to star in the show’s 60th anniversary as the 15th Doctor – yep, you read that right.

Jodie Whittaker’s final episode, The Power of the Doctor, saw the actress bow out as the 13th incarnation of the timelord, regenerating into none other than 10th Doctor star David Tennant.

Returning showrunner Russell T Davies has now confirmed that Ncuti will actually play the 15th Doctor – presumably meaning that David will officially be the 14th incarnation.

In a new glimpse at what’s to come, Ncuti can be seen wearing a white shirt with a tie around his neck, with a very sombre expression on his face.

The trailer sees David declaring: ‘I don’t know who I am anymore,’ before Ncuti cried: ‘Someone tell me what the hell is going on here.’

It’s also been confirmed that David and co-star Catherine Tate, who starred as Donna Noble, will return for three episodes in 2023 to celebrate the 60th anniversary.

Returning showrunner Russell T Davies said: ‘If you thought the appearance of David Tennant was a shock, we’ve got plenty more surprises on the way!

‘The path to Ncuti’s Fifteenth Doctor is laden with mystery, horror, robots, puppets, danger and fun! And how is it connected to the return of the wonderful Donna Noble? How, what, why? We’re giving you a year to speculate, and then all hell lets loose!’

The last time David appeared in a Doctor Who episode was in 2010, when he returned for the show’s 50th anniversary alongside 11th Doctor actor Matt Smith for the episode The Day Of The Doctor.

In her final episode, Jodie’s Doctor faced the Daleks, the Cybermen and the Master (played by Sacha Dhawan) in the 90-minute epic, which also saw iconic classic Doctors and companions return.

She also said goodbye to companion Yaz, played by Mandip Gill, who has been with her from the beginning.

Showrunner Chris Chibnall has said of Jodie’s exit: She changed the game. She changed history in terms of Doctor Who. I think what she’s brought is a Doctor Who full of hope, and positivity and generosity and I think that these times really needed that.

‘I think she’s shown off her incredible sort of clowning side, the humour that she can do, which maybe some people didn’t know her for beforehand. I think she’s enriched the character of the Doctor, as all actors who play the Doctor do, but it’s an incredibly bold and brave performance.

‘And she took responsibility for the Doctor being a woman, she took it on her shoulders and represented and that was not a given, that was her strength and decision and power. I think she has been utterly magnificent, she exceeded all of our expectations.

The Power of the Doctor is available for catch-up on BBC iPlayer.


MORE : David Tennant returns to Doctor Who after 12 years as Jodie Whittaker regenerates and bows out


MORE : Doctor Who: The Power of the Doctor is frightening fun as Jodie Whittaker bows out