Doctor Who Disney deal sparks backlash from Australian fans who will have to pay for new episodes: ‘It feels so evil’ 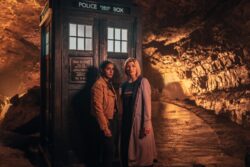 Doctor Who will no longer to be free to watch for audiences in Australia (Picture: BBC)

The Doctor Who deal with Disney has not gone down well with some fans overseas.

It was announced yesterday that BBC and Disney had come together to deliver new seasons of the show to audiences outside of the UK and Ireland on the streaming platform.

The global reach could see millions more households tune in for the long-running series, however long-time fans in parts of the world such as Australia will now have to fork out for episodes.

A partnership spanning more than five decades, the BBC had a long standing deal with the Australian public broadcaster ABC that enabled Whovians to tune in and keep up with the sci-fi programme for free.

However, as of next season, they will need to start paying to continue watching.

As the news broke, fans took to social media to express their disappointment over parts of the deal and lamented the end of an era, or as some people put it, an ‘extermination’ of the partnership.

Positive: Australia can now watch Doctor Who around the same time as the UK and the US.

Negative: you need access to Disney+ to watch it https://t.co/UkVvuq7PHm

WTF….. Doctor Who is no longer going to be shown on ABC Australia….. it’s going to Disney, so if I want to see it I have to pay! Bugger!!!

Sadly, the ABC will no longer air new episodes of ‘Doctor Who’ in Australia as the rights now revert to Disney+; end of an era

‘Sadly, the ABC will no longer air new episodes of Doctor Who in Australia as the rights now revert to Disney+; end of an era,’ writer Cameron Williams wrote.

‘Doctor Who being exclusively on Disney Plus outside of the UK feels so evil. it’s been freely available to everyone for almost 60 years and now you have to pay for it? This sucks,’ another user posted on Twitter.

A Timelord fan bemoaned: ‘David Tennant returning to DoctorWho at the same time that the BBC partners with Disney to distribute the show is not good news for me not being SUPER ANNOYING sorry.’

‘Extremely disappointed that Doctor Who will no longer be on free-to-air TV. I’m not paying for Disney+ just for Doctor Who and neither will my family. You’ve lost a whole family of viewers,’ another penned.

‘Can’t believe you sold out Australia for disney smh… the brits are backstabbers,’ a Doctor Who fan said.

Extremely disappointed that Doctor Who will no longer be on free-to-air TV. Iâm not paying for Disney+ just for Doctor Who and neither will my family. Youâve lost a whole family of viewers.

doctor who being exclusively on disney+ outside of the uk feels so evil. it’s been freely available to everyone for almost 60 years and now you have to pay for it? this sucks 🙁

doctor who being poached by disney in australia is bad, actually

A Twitter user commented: ‘Doctor Who being poached by disney in australia is bad, actually.’

Tim Hunter, a Melbourne-based fan of the series told The Sydney Morning Herald he thought Disney was a ‘behemoth’ taking over science fiction and fantasy titles and that the deal was ‘a bit of a sell out’.

‘I just feel like it’s going to be absorbed into the Disney universe,’ he said.

Doctor Who has been broadcast for free in Australia since the 1960s, when William Hartnell was the star (Picture: Sunday Mirror/Mirrorpix/Getty Images)

In a statement, the ABC referenced the ‘long friendship’ between the two broadcasters, but added that ‘the universe has called the Doctor in a different direction and Doctor Who will no longer appear on the ABC beyond the current season’.

‘Everyone at the ABC wishes the Doctor well on their adventures and we hope the Time Lord will visit us again at some stage in the future.’

Doctor Who premieres in the UK on BBC and then on Disney+ worldwide is a fantastic deal. Itâs reaching a much bigger audience now and at the perfect time with David, Ncuti and great writers. Finally I can tell ppl to go watch it on a streaming platform nearly everyone has

First buying the rights in 1965, the ABC was one of the first broadcasters outside the UK to pick up the series.

Despite Australian audiences soon being forced to pay, other Doctor Who fans have seen a silver lining in the contract with the Mouse House.

For those willing and able to tune in though, next year will mark the 60th anniversary of Doctor Who, with Russell T Davies returning to the fold as showrunner, while Ncuti Gatwa will be taking over the reins from Jodie Whittaker.

Metro.co.uk has reached out to Disney Plus and the BBC for comment.

Doctor Who is available to stream on BBC iPlayer in the UK.


MORE : BBC accused of being dishonest over Doctor Who filming request at Dorset’s Durdle Door

The show has been available to watch for free since 1965.