Do you remember when Emmerdale’s Jay Kontzle reached the Britain’s Got Talent final? 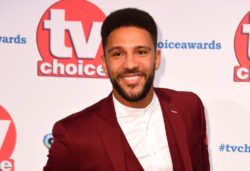 Jay Kontzle may be best known to us now as Emmerdale’s Billy Fletcher – currently trying to be a calm voice of reason in the aftermath of Harriet Finch (Katherine Dow Blyton)’s shock death and one of the few people who can stand up to Kim Tate (Claire King).

But 10 years ago, he was on our ITV screens in a very different role as a singer in a boy band, featuring in both The X Factor and Britain’s Got Talent.

Jay was in a band called The Mend along with three friends and they auditioned for The X Factor in 2011 but were asked to leave at the bootcamp stage as they already had a management deal in place, which was against the competition’s rules.

The following year they were back, this time auditioning for Britain’s Got Talent in front of Alesha Dixon, David Walliams, Amanda Holden and Simon Cowell.

‘We’ve all got problems at home but we’ll keep doing music until we can sort them problems out,’ a young Jay explains in the VT before their audition.

Jay was raised by his grandparents in Crewe, Cheshire, after his mother was killed in a car crash when he was four.

Quite the varied career! (Picture: PA)

They sang Otis Redding’s Sittin’ On The Dock Of The Bay and had the audience on their feet with their part-rapped, part-sung version.

Simon Cowell said, ‘I’m very happy you auditioned. I like you a lot.’

The band reached the final, eventually finishing in 7th place. They went on to support Little Mix in their 2013 DNA tour.

Jay has told Inside Soap that he enjoyed the experience of being in a band but didn’t like the business side of the music industry.

‘The best thing about being in a band was the insight I got into the industry,’ he said.

‘We worked with people at the top of their game, like Simon Cowell. But in the end, the business side of music put me off. It was an experience! I don’t really talk about it now because I’ve kind of moved on.’


MORE : Emmerdale spoilers: Chas bans Moira from Faith’s funeral after discovering the true cause of death

He went on to support Little Mix.