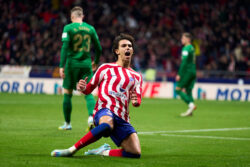 Joao Felix is available on loan with a number of Premier League clubs interested in signing the Atletico Madrid forward (Picture: Getty)

Diego Simeone hinted Joao Felix’s future is out of his hands after the Atletico Madrid forward scored in last night’s win over Elche.

The 23-year-old was billed as the ‘new Cristiano Ronaldo’ when he joined the Spanish club from Benfica in a staggering £113million deal three years ago.

Felix has shown only flashes of his true potential under Simeone, however, and the relationship between the two has often been uneasy with the versatile forward far from enamoured with his manager’s style of football.

Arsenal, Chelsea and Manchester United have all been linked with a move for Felix in January with all three Premier League heavyweights keen to strengthen their respective forward lines.

Felix is understood to be available on a six-month loan deal that would set any interested party back £8million.

Arsenal and Chelsea have already embarked on initial discussion with the player’s agent, Jorge Mendes, but both are reluctant to pay such a hefty fee for a short-term loan.

Despite apparently having been deemed surplus to requirements, Felix started against Elche last night and scored his fifth goal of the season.

Joao Felix was substituted midway through the second half against Elche by Diego Simeone (Picture: Getty)

Felix, who starred at the World Cup for Portugal, was substituted midway through the second period and looked far from happy.

“While he’s here, I’ll try to get the best out of Joao Felix for the club,’ said Simeone when asked about Felix’s future in his post-match press conference.

‘Then we will see what’s gonna happen.’

Arsenal, meanwhile, are confident they will sign at least one new forward in the upcoming window, despite having an initial bid for Mikhailo Mudryk rejected by Shakhtar Donetsk.

Speaking about the type of player Arsenal want to recruit to strengthen their title challenge, Mikel Arteta said after the Boxing Day win over West Ham: You know that I never speak to other players that are not with us.

‘And it might be that you have to ask me the question but we said that we will try to find ways to strengthen the team. We will find the right players and that’s all I can say.’


MORE : Arsenal want to sign Joao Felix and Mikhailo Mudryk in January on one condition

The Portugal international is available for £8million on a six-month loan deal.