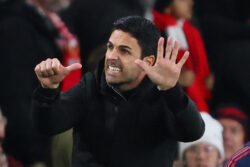 Mikel Arteta was furious both during and after the match against Newcastle (Picture: Getty)

Former Premier League referee Dermot Gallagher has aimed a dig at Arsenal boss Mikel Arteta for his whinging at a penalty decision on Tuesday night.

The Gunners – who sit top of the Premier League table – were held to a 0-0 draw by Newcastle United at the Emirates and Arteta was furious both during and after the match as his side were denied two spot kicks, describing it as ‘scandalous’.

But Gallagher feels Arteta can have no complaints over the apparent handball and accused of the Spaniard of double standards.

‘I definitely think this isn’t a penalty,’ Gallagher told Sky Sports about the Xhaka-Murphy incident. ‘I’d have been very surprised had this been given.

‘It gets smashed in, you can see how close the player is. He’s trying to get his arm out of the way.

‘Is his arm in a position you’d expect defending that ball? I’d say yes. Has it come at him with speed? It’s come very fast at him from a short distance.

‘I think if that was given against Arsenal, Mikel Arteta would’ve been equally incensed.’

Gallagher also shared his thoughts on the Burn-Gabriel incident and felt it was more of a ’50-50′.

‘If you drill down into it forensically, your decision will be that it is a penalty,’ he added.

‘But from a VAR perspective, where they have the time to see it, I think it’s 50-50. That’s why they err on the side of the referee and it wasn’t given.

‘Burn has won the battle there as when you look at the replay, it’s easy to justify a penalty.

‘But when you consider how they want VAR to operate now, I can understand why it wasn’t given.’