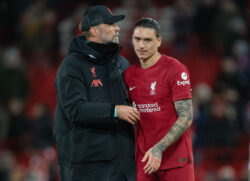 Darwin Nunez was praised by Jurgen Klopp despite failing to score in Liverpool’s win over Leicester City (Picture: Getty)

The Uruguay international was a thorn in Leicester City’s side last night as Jurgen Klopp’s side, rather fortuitously, earned a 2-1 victory which represented their fourth Premier League win in succession.

Nunez, however, left his shooting boots at home again and missed several presentable opportunities to make the points safe.

Former Chelsea striker Cascarino fears Nunez’s early struggles are eerily similar to those experienced by Werner during his three years at Stamford Bridge when his industry were undermined by his wastefulness in front of goal.

‘He wasn’t clinical enough and he’s going to have to become a better finisher,’ Cascarino told talkSPORT.

‘He’s doing everything right to get in the position to score don’t stop doing that. I feel like he’ll go on a run, he will do beecause he’s got such devastating pace.

‘Liverpool fans are really enjoying his performances and they’ll take to him because of his desire to make other people’s jobs easier.’

Nunez has missed 14 big chances so far this season, more than any other player in the Premier League.

‘He reminds me of Timo Werner where he couldn’t buy a goal, his pace was brilliant he never stopped working.,’ added Cascarino. It didn’t finish well but it feels a little bit like that but there is a bit more about Nunez I do think he’ll come good but I was never convinced he’d come good.’

Despite another firing another blank, Klopp was delighted with Nunez’s contribution against the Foxes as the Reds enhanced their top four hopes.

He said: ‘It was a brilliant performance from him tonight,’ Klopp said after Liverpool closed the gap to fourth-placed Tottenham to two points.

‘I know people only want to look at the stats but the [second] goal comes from him. It was a clear improvement to the last situations. He didn’t just shoot, he chipped it and it was great.

‘The chance he created for Mo as well. He took three defenders out of the game pretty much. That’s special, that’s really special. I’m really happy about that.’

The summer signing from Benfica has missed 14 ‘big chances’ this season, more than any other Premier League striker.