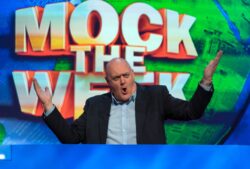 Dara Ó Briain joked the country is in a ‘far more stable’ position than when the first episode of Mock The Week aired as he drew the long-running series to a close.

The comedian commemorated the BBC show, which launched the careers of Russell Howard and Frankie Boyle, on its final instalment on Friday but couldn’t resist making jibes about the chaotic government.

Mock The Week’s final outing comes several months after it was announced the beloved comedy programme was being axed after 17 years and 21 series and a total of 232 episodes.

The show began with discussion of the possible fate of the former Prime Minister Liz Truss, having been recorded before her resignation on Thursday.

‘At the time of recording Hunt is still the Chancellor, and Liz Truss is still the Prime Minister,’ Dara said, before admitting that ‘literally anything’ could have happened by the time the episode was broadcast.

‘There is a sort of irony that we have been cancelled but we’re still likely to survive longer than Liz Truss,’ Hugh replied.

Rhys added that the show was ‘an allegory for the Tory party,’ saying: ‘We’re all sat around in fancy clothes talking about the news as if we don’t know this is all over.’

‘It has been an absolute blast to do, and we leave with the quiet pride that in the years that we have been on we have left the country in a far more stable, prosperous and happy situation than when we started, and we’ll always have that.

He continued: ‘We’re not a very sentimental, mawkish show so I’ll just say on behalf of the production team, on behalf of myself and all of the comedians here, it’s been an absolute joy to talk to you and an honour.

The episode closed with a compilation of photos from past episodes as well as a small post-credits skit.

Mock The Week’s creator Dan Patterson previously told Metro.co.uk that Dara learnt the show had been cancelled while he was on a family holiday.

‘I called him,’ Dan explained. ‘The unfortunate thing was that he was on holiday with his family.’

‘We have left the country in a far more stable situation than when we started,’ Dara joked.