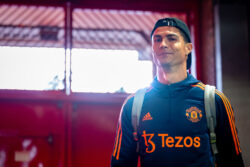 Cristiano Ronaldo has sent a message of support to his Manchester United teammates ahead of this evening’s Premier League showdown against Chelsea.

The 37-year-old will play no part in his side’s attempt to secure three points at the expense of a top four rival after he was axed from the squad by Erik ten Hag following his refusal to come on as a substitute against Tottenham in midweek.

Ronaldo had remained silent on social media since issuing a statement on Thursday evening in which he refused the opportunity to make a full apology and accept responsibility for his act of defiance.

The five-time Ballon d’Or winner, who trained with United’s Under-21 squad on Friday, didn’t travel with the rest of the first team to west London but did offer brief words of encouragement on Instagram three hours prior to kick-off and wrote: ‘Let’s go Manchester United.’

Ten Hag, meanwhile, spoke at his pre-match press conference on Friday afternoon and confirmed the club’s highest paid player declined his request to take to the field for the final few minutes against Spurs.

Explaining his decision to take a hardline stance, the Dutchman said: ‘What the talk – if you ask about that – is between Cristiano and me, the statement is also clear, I think. He remains an important player in the squad.

Cristiano Ronaldo sent a message of support to his Man Utd teammates ahead of Saturday’s game against Chelsea (Picture: Getty)

‘After Vallecano [when Ronaldo left early during a friendly] I told him it was unacceptable but not just him everyone. This is the second time, there are consequences.

‘We miss him tomorrow. It’s a miss for the squad but it’s important for the attitude and mentality of the group and now we have to focus on Chelsea as that is important.’

Probed on whether it was true that Ronaldo refused to come on against Tottenham, Ten Hag replied bluntly: ‘Yes.’

On why Ronaldo has been made to train away from the senior team for the next week, Ten Hag added: ‘It will be a [time for] reflection for him, but also for everyone else.

‘I said at the start of the season, next time there have to be consequences otherwise when you are living together and playing together, football is a team sport and you have to fulfil certain standards. And I have to control it.’

CR7 will be watching from home this evening.