Could there be blackouts in the UK and when would they be? 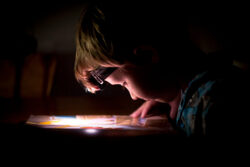 Could we be left in the dark this winter? (Picture: Getty Images)

Brits have been warned to prepare for the prospect of blackouts this winter.

It comes after the National Grid Electricity System Operator issued its bleak ‘winter outlook’ report that details the scenario that a shortage of gas could mean ‘planned interruptions of electricity supply to businesses and households.’

Since then, the grid warned that in the ‘unlikely’ scenario of there not being enough gas, some areas could face three-hour planned outages.

Concerns about the problem have been simmering across Europe thanks to Vladimir Putin’s war with Ukraine.

But what is a blackout, and when could these blackouts happen? Here’s what you need to know.

What is a blackout?

A blackout is a large-scale loss of power supply due to a failure of the power grid.

Blackouts are caused by an imbalance between power generation and consumption.

It means areas go into a blackout for limited amounts of time to ease the strain on the electrical grid.

Blackouts are often confused with a brownout. This is a loss of power on a smaller scale that is caused by high electricity demand.

Could there be blackouts in the UK?

Winter blackouts are looking unlikely, but there is a plan in place in case they happen.

The National Grid first warned winter outages were possible but ‘unlikely’ at the start of the month.

This was because energy regulator Ofgem revealed there was a ‘significant risk’ of gas shortages due to Russia’s restriction of supplies to Europe.

The ‘base case’ is still that energy stocks will be sufficient to deal with threats by Russia to further cut supplies, and that blackouts remain the ‘worst-case scenario’.

When would the blackouts be?

National Grid chief John Pettigrew has said any outages would probably be limited to ‘between 4pm and 7pm in the evenings on those weekdays when it’s really, really cold in January and February’.

If this happens, the outages will be staggered throughout the day and vary in length depending on the severity of shortages.

Charts have been published to show when outages would take place as part of the government’s emergency code, which was last updated in 2019.

They start from three outages lasting three hours each, kept as close together as possible so as to minimise disruption.

Caption: Govt documents reveal exact time your house would lose power if blackouts are imposed due to energy crisis

Caption: Govt documents reveal exact time your house would lose power if blackouts are imposed due to energy crisis

There are a total of 18 levels peaking at a total week-long blackout, though engineers say it’s ‘unlikely’ they will even need to activate Level 1.

Properties have been classed with a letter from A to U which determines when they will lose power in each level of the disconnection plan.

You can check which letter your property falls under on your energy bill.


MORE : BBC ‘has prepared emergency broadcasts in case of blackouts this winter’


MORE : What is a blackout and when did the UK last have one?

The UK could be plunged into darkness this winter.