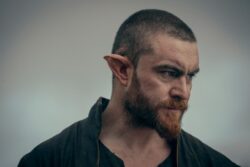 Warning: spoilers ahead for The Witcher: Blood Origin.

The Witcher: Blood Origin takes viewers back over a thousand years before the events of Henry Cavill’s original show, revealing what the world was like before humans conquered and elves were still at the height of their power.

While it’s described as a limited series, Metro.co.uk were curious to ask co-showrunner Declan de Barra at the London premiere whether he would consider continuing the tale in some form in future, whether in a possible season 2 or further spin-offs featuring familiar characters.

We also spoke to several of the stars of the programme to see if they would be open to returning if given the opportunity.

‘I love this world. I would keep working at it in a heartbeat.’

When questioned further on whether there were any characters in particular he was keen to explore, he added: ‘Anyone that survives.’

For anyone who’s seen The Witcher: Blood Origin, they’ll know that several of the main characters survive the end, including Francesa, who plays Meldof; Huw, who plays Brother Death; Lizzie Annis, who stars as Zacaré; and Zach Wyatt, who portrays Syndril.

When asked if she would be open to reprising her role, Francesca replied: ‘I’d run at the chance, yeah. Of course! I’d be first in line, I’d be like, “Please let me be in the next one!”

Brother Death and Meldof have a brilliant dynamic on screen (Picture: Netflix)

‘I’d love it, it would be awesome. Any excuse to work with these beautiful people again.’

Huw added: ‘I absolutely love Brother Death, so to be given the opportunity just to step into his shoes one more time would be an absolute joy and a pleasure, for sure.’

Meanwhile, Lizzie and Zach were both emphatic that they’d both happily come back, as the former said: ‘Absolutely – in one word, absolutely. Nothing could keep me away really,’ while the latter chimed in to say: ‘Yeah, absolutely!’

Which characters would you like to see return?Comment Now

During a recent interview, co-showrunner Lauren Schmidt Hissrich explained that Declan purposely ‘left characters in places where you want to know what happens next’, including the plot point of Sophia’s Éile becoming pregnant.

Declan added to Express.co.uk: ‘I thought it would be great if we finished on this unresolved note. We don’t know what happens to some of these characters, but we fall in love with them a little.’

As for whether The Witcher: Blood Origin could have a season two, we feel that may be unlikely at the moment… but we wouldn’t rule out some of these characters popping up again in The Witcher universe at some point in future.

The Witcher: Blood Origin is available to watch on Netflix.


MORE : The Witcher: Blood Origin showrunner was ‘terrified’ to meet the legend that is Michelle Yeoh

Several of the show’s actors would love to return.