Coronation Street spoilers: Teddy dead after he discovers the truth about Leo? 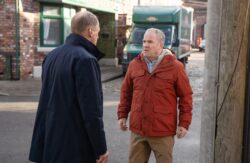 Teddy (Grant Burgin) seemed close to discovering the truth about son Leo’s disappearance in tonight’s Coronation Street, until a van put a sudden end to his speculation.

Stephen (Todd Boyce) had been keeping an eye out for Teddy all day, after discovering that he planned to pay Jenny (Sally Ann Matthews) a visit that afternoon.

He soon spotted him drinking at the Weatherfield Christmas markets, presumably drowning his sorrows over the disappearance of his son.

Stephen was determined to put a stop to his meeting with Jenny, and instantly struck up a conversation with the man who’s son he had murdered.

Teddy began to get suspicious over Stephen’s questions regarding Leo’s whereabouts, and, after revealing that a friend had managed to track down where Leo’s texts had been sent from, suggested that Stephen knew more than he was letting on.

However, before Teddy could take things any further, he was struck down by a van in the middle of the road.

Will Teddy recover from the accident, or is Stephen off the hook for good?

Could this be the end of Teddy?