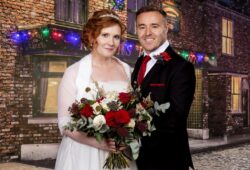 Oh, what a year it’s been for Fiz Stape (Jennie McAlpine) and Tyrone Dobbs (Alan Halsall) in Coronation Street.

On Christmas Day last year, Fiz was with Phill (Jamie Kenna) and Tyrone was preparing to spend his day alongside Evelyn (Maureen Lipman).

Things quickly got chaotic, however, as Phill and Ty ended up hilariously fighting in the street, causing quite the scene with water guns and inflatables.

Now, everything has changed.

It turns out, Tyrone’s secret wedding plan was actually a success…eventually.

Fiz wasn’t happy as the episode got underway. She had received some cheap chocolates and a keyring from the garage as her present from Ty, so she upped sticks and headed out of Weatherfield, leaving a note for her family and telling them she’s gone to buy a turkey.

On a country road, Fiz was forced to stop as her car broke down!

Spotted by an old man, who was dressed in red with a white beard (ahem), Fiz explained her situation and got talking to him.

Thankfully, this soap wedding was one destined to work out.

Fiz arrived at the hotel, quickly got changed and finally, after all these years, she married Tyrone.