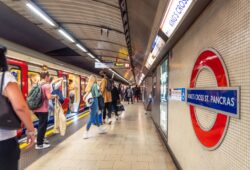 The daily commute is a low point for half of workers (Picture: Getty Images)

Manspreaders, takeaway fans eating strong-smelling food and slobs who put their feet up on seats are among our worst nightmares on public transport, a poll of commuters finds.

Half of those who regularly travel on buses, trains, trams, the Tube or boats said getting to and from work was the low point of their day.

With a typical commute lasting 41 minutes – and a third of that spent being irritated – we are left hot under the collar by our travels for two-and-a-half hours every working week.

Other common gripes include passengers hogging seats with their bags, having loud and graphic conversations and having to stand close to someone’s armpits – though half of the 1,000 polled admitted they had been guilty.

Manspreaders – men who open their legs widely – were severely criticised, while travellers of any gender who take up too much space make us fume.

Aggressive commuters, selfish passengers refusing to give up seats for those in need – such as pregnant women and the elderly – and litterbugs who leave rubbish behind are all bugbears. Drunkards, perfume fans doused in scent and people in packed carriages who refuse to move down were also named and shamed.

Meanwhile, the system itself – with planned services not turning up – riles us. Nevertheless, one in five plans to go to the office more this winter to save on heating and electricity at home.

‘Commuting is a necessity for many working adults and it’s often the source of much frustration,’ said Mark Plowright, of Virgin Trains Ticketing, which offers rewards to passengers.

‘It shouldn’t be such a nightmare – it’s just certain things can ruin what should be a time to relax.’

What’s your opinion? Text the word VIEWS followed by your comment, name and where you live to 65700. Standard network charges apply.

But one in five workers are heading to the office more to save on energy bills.