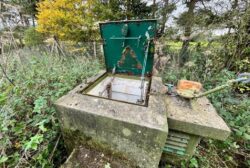 Here’s a place that will hit that niche spot: a Cold War bunker, up for auction with a bargain guide price of £25,000.

Yep, for the price of a flat deposit, you could own your very own underground vault, built in 1959.

And you’d even get original gas masks and body bags thrown in to sweeten the deal.

The bunker, in Louth, Lincolnshire, isn’t exactly set up for the cosiest of living situations, but it does have a single bed, a desk, and a cupboard.

We can also spy some loo roll.

Perhaps a lick of paint could be nice? (Picture: North News & Pictures Ltd )

‘I figured the bunker may be useful given everything that’s happening in Ukraine,’ said Mark.

‘It was built the year I was born and I think I bought it due to a bit of a midlife crisis.

‘I thought “that’s cool” and decided I wanted it.’

Hey, we’ve all been there.

The bunker has a room with a bed and desk (Picture: North News & Pictures Ltd nort)

It could do with a bit of a makeover (Picture: North News & Pictures Ltd nort)

Mark has used the bunker as a sort of holiday home, sleeping in the bed and showering in a caravan he keeps close by.

But in recent years, he’s hardly used the space, so is selling it in the hopes of getting some cash for a nice holiday.

‘I am selling because it seems to be a good time given the global crisis, and I haven’t been there in years,’ he explained.

‘I have body bags in there and some gas masks. That goes back to my army training and what to do in an attack.

The vault was built in response to the thread of a nuclear attack (Picture: North News & Pictures Ltd nort)

‘There’s a bed and sleeping bag but that’s pretty much it.

‘There’s also a red box telephone so in the event of a nuclear attack, that’s the only phone that will work – not that there’ll be many phones left to call.

‘It has solar and wind power too.’

The bunker, which fits three people, sits beneath a field between the A16 London Road and Kenwick Hill, and you get inside by heading down a 14ft shaft.

It used to serve as a Royal Observer Corps monitoring post, and was built due to the threat of a nuclear attack in the 50s.

If a nuclear attack had occurred, three people would have been able to take shelter in the vault and report on what was happening, with enough food and water to last for two weeks.

This property is one of 1,500 bunkers built during the period, but only 258 of these still exist.

Mark, of Saltburn-by-the-sea, added: ‘When I bought it, I think it was a male menopause type of thing, like buying a new car.

‘I would just be happy to get my money back.’

The property will be auctioned on November 24 through SDL Property Auctions.

He’s now put the space up for auction with a guide price of £25,000 (Picture: North News & Pictures Ltd nort)

Jim Demitriou, national valuer at SDL Property Auctions, said: ‘It’s a great property for people looking for something off grid or to get away from it all.

‘It’s a piece of British history so it could be nice for someone interested in historic places.

‘I would advise buyers to speak with planning permission or their local council to see what they can do with it.

‘We’ve had about four or five people enquire about it already, before it was on our site.

‘We’re anticipating a flurry of interest in the bunker.

‘I’m really excited about this property. I’ve never sold a nuclear bunker before.

‘The guide price is £25K but may the best bidder win.’


MORE : A treehouse meeting room, fake zoo and even a pub – is this Britain’s trendiest office?


MORE : Dad built AirBnB treehouse without waiting for permission because he has cancer

You’ll just need to clamber down a 14ft shaft.