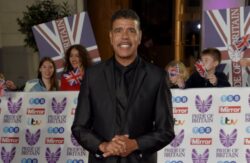 After pushing for more public awareness about apraxia, Chris Kamara is working on a documentary about his diagnosis as he works to assist others.

Earlier this year, the broadcaster revealed that he had developed the neurological condition, which leaves those diagnosed struggling with certain motor movements and can often affect speech, as in Chris’ case.

Since quitting his job on Sky Sport’s Soccer Saturday after 24 years in April, the former footballer been dedicating a lot of his attention to trying to inform people about not only what he has been dealing with, but how the condition affects others.

Now Chris has revealed that he will be fronting a documentary for ITV about apraxia.

‘We have been speaking to people with apraxia and dyspraxia. They are people who are worse off than me,’ he told the Daily Star newspaper’s Hot TV column.

‘It has been emotional, but I haven’t been nervous. Hopefully with this documentary we will open a few eyes.’

Earlier this week, Chris spoke to Metro.co.uk on the red carpet at the Pride of Britain Awards and said that raising awareness was especially important because of the barriers to treatment.

Chris revealed his diagnosis back in March (Picture: The Diary Of A CEO)

‘People who are suffering can’t get the proper help because it’s not available on the NHS. To get help you need to go private,’ he said.

‘So it’s really important to raise awareness about this,’ he added.

He also said that having the government provide more support would be paramount.

‘It would be nice for families who have got youngsters, who can’t actually speak at all to be helped.’

Since opening up about his diagnosis in March, Kumara has been incredibly candid about the effect it has had on his life.

‘I feel a fraud now, in terms of broadcasting. I don’t bring to the table what I used to. So that’s hard,’ he said while being interviewed on the Diary of a CEO podcast.

‘My life, away from the screen, couldn’t be any better – grandkids, family, it’s perfect.’ Taking steps to mitigate the impact of the condition, Kumara is undergoing treatments including one that involves microcurrents being pumped through his body for seven hours per day, which he said got him back to about 60% of his ‘old self’.


The broadcaster is hoping to ‘open a few eyes’.