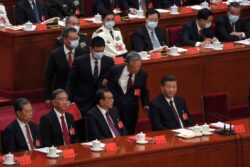 China’s former president has been unexpectedly escorted out of the Communist Party’s pivotal congress meeting as Xi Jinping solidifies his grip on power.

Hu Jintao, the current president’s immediate predecessor, was seated to the left of the Chinese leader in the auditorium of Beijing’s Great Hall of the People.

A camera in the room showed him being approached by two security guards who led him off the stage.

It is unknown why the 79-year-old politician was removed from the meeting but he appeared confused by the development and initially resisted the attempts, even turning back towards his seat at one point.

On his way out, he briefly shared a few words with Xi before patting Premier Li Keqiang on the shoulder.

Li, the nation’s number two official and the man widely tipped to succeed Xi was one of four officials ousted from the Communist Party’s all-powerful Politburo as the President further consolidated his grip on power.

The 67-year-old premier was appointed in 2013 and has a background as a liberal economist.

He was close to China’s previous president Hu Jintao and was rumored to have a frosty relationship with Xi.

Former Chinese President Hu Jintao said a few words to Xi Jinping as he was escorted from Congress (Picture: Getty)

The move comes as Jinping looks to stack the Politburo with loyalists as he seeks to pass an amendment which could grant him an unprecedented third term as president.

Since assuming office in 2012, Xi has repeatedly made moves to consolidate his individual power, spearheading a move to eliminate term limits back in 2018.

Prior to that, a previous congress in 2017 saw the further party boost Mr Xi’s status by enshrining his ideas, known as Xi Jinping Thought, in its charter.

If not for those changes, Xi would have been stepping down this week – but instead, he has paved the way to appoint himself ruler for life.

Following the reshuffle, analysts are now waiting to see if Xi will formally adopt the title of ‘People’s Leader’ or ‘Chairman’, an honorific not used since the days of Mao Zedong.

Although just a formality, adoption of the title would further enshrine him as China’s absolute ruler and his political thought as the foundational ideology of the Chinese state.

Professor Steve Tsang, director of the SOAS China Institute, said acquiring the title of ‘the People’s Leader’ would put Xi ‘in a different league’.

‘He is the supreme leader of China by virtue of being the leader of the CCP, whether that office is styled general secretary or chairman,’ said Tsang.

‘But… the People’s Leader cannot have a term limit and removing one from such a position is “anti-people”.’

Giving Xi the title would signal that he was ‘untouchable’, Tsang added, ‘and in effect to be honoured and treated as a demigod’.

‘It [would] elevate him to at least a position comparable to Mao, as the Great Helmsman.’

In a brief closing statement, the Chinese president said the constitutional revision ‘sets out clear requirements for upholding and strengthening the party’s overall leadership’.

‘Dare to struggle, dare to win, bury your heads and work hard. Be determined to keep forging ahead,’ he added.

China’s former president was escorted out of Congress as Xi Jinping purged his successor and seeks to appoint himself ruler for life.