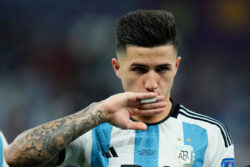 Enzo Fernandez is going to be very expensive for any buyer this month (Picture: Getty Images)

There remains no agreement between Chelsea and Benfica for Enzo Fernandez, with the Blues not yet prepared to meet the Argentinian’s release clause.

The midfielder has a release clause worth €120m (£105m), but transfer guru Fabrizio Romano reports that the offer Chelsea have made for him is worth just €85m (£74.7m).

There was a meeting between the officials of the two clubs on Wednesday afternoon with fees and the structure of a potential deal discussed, but no agreement was reached.

Romano reports that Chelsea have not considered paying the £105m release clause for the 21-year-old.

Benfica may well be willing to accept less than that release clause, but would want a significant sum in an initial payment if they were to accept a lower amount.

Fernandez returned to action for Benfica in the Portuguese Primeira Liga on 30 December, starting in a 3-0 defeat at Sporting Braga for the league leaders.

Despite the lack of agreement thus far, Portuguese newspaper Record reports that Benfica president Rui Costa has now agreed to sell Fernandez and super agent Jorge Mendes has travelled to London to finalise negotiations with Chelsea.

The report also claims that Fernandez told Benfica’s head coach Roger Schmidt on Tuesday that his immediate priority is to join Chelsea.

Talks are expected to continue, but Chelsea, meanwhile, are also exploring the possibility of signing Shakhtar Donetsk winger Mykhaylo Mudryk ahead of Arsenal.

The Gunners have already seen their opening offer for the Ukraine international turned down, with Shakhtar holding out for a fee in the region of £85m.

Benfica are not budging yet.