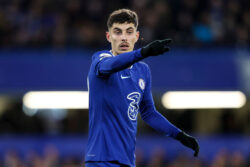 Chelsea hero Jimmy Floyd Hasselbaink believes that Kai Havertz is not good enough to lead the line for the Blues.

With the January transfer window now well underway, Chelsea have been linked with many different players in different positions as Graham Potter looks to rebuild his squad.

The Blues are enduring a very tough, transitional season under Potter and new owner Todd Boehly, with the club currently 10th in the league, 10 points off the top four.

They have just one win from their last six games in all competitions and on Sunday they face another tricky test as they travel to Manchester City for their FA Cup third-round clash.

While they have already strengthened this month with the arrival of centre-back Benoit Badiashile and midfielder Andrey Santos, there are many concerns about their forward line, especially since they have only scored 20 goals in 17 league games so far.

They have bought in young striker David Datro Fofana, though he is not expected to make an instant impact at Stamford Bridge, and while there are reports that they could hijack Arsenal’s move for winger Mykhailo Mudryk, it doesn’t seem likely.

This will all be of concern to Hasselbaink who is not convinced by Chelsea’s current crop of forwards, singling out Havertz and Christian Pulisic for criticism.

‘I’m not sure how much truth there is that Chelsea want to hijack any deal for him but they do need more creativity and a bigger threat going forward.

‘Christian Pulisic has tried his best recently but Chelsea aren’t creating enough. Kai Havertz is half of the player that he was last year so they need more players who can come into the team and make a difference straight away.’

Pulisic’s struggles are well-documented and the USA international seems destined to leave Chelsea soon, but there are many who believe that Havertz has the potential to be Potter’s star man.

Havertz’s performances this season have received both much praise and much criticism as the German forward continues to struggle for consistency.

It’s been a mixed season so far for the 23-year-old.