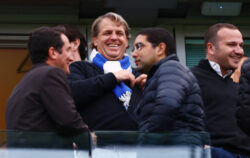 Chelsea have reached an agreement with Monaco to hire their technical director Laurence Stewart as the new owners continue to piece togetehr their management set-up.

Club legend Petr Cech had filled the role of technical director but left after Todd Boehly and Clearlake Capital took over the Blues, buying the Premier League outfit from Roman Abramovich.

The former goalkeeper has not been replaced as yet, but the Athletic report that Stewart will take up the role and return to the Premier League where he has worked before.

The Englishman was previously at the FA and Manchester City working in performance analysis and was then head of scouting with RRB Leipzig and the Red Bull network, before moving to Monaco.

The Chelsea owners have been open about wanting to set up a multi-club model based around Stamford Bridge, so Stewart’s experience at Manchester City and Red Bull will have been a big plus for him in getting the role.

Former RB Salzburg technical director Christopher Vivell had also been thought to be moving to Stamford Bridge. Whether Stewart arriving scuppers that move or not is unclear.

The Blues are also looking to bring in Joe Shields from Southampton as director of recruitment.

There has been huge change at Chelsea over the last year and new manager Graham Potter is enjoying a good start to his role after swapping Brighton for west London.

The 1-1 draw with Manchester United at the weekend left the Blues fifth in the Premier League, but only out of the top four on goal difference, with a game in hand on Tottenham in third and Newcastle who sit fourth.

Potter also appears to have taken to the Champions League well, with Chelsea top of Group E after four games ahead of a trip to RB Salzburg on Tuesday.

The Englishman is returning to the Premier League.