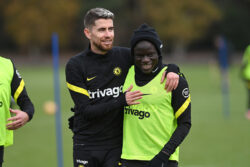 Jorginho and N’Golo Kante are out of contract this summer (Picture: Getty)

Chelsea believe they’ve convinced N’Golo Kante and Jorginho to remain at the club and are hopeful the pair will sign new contracts.

Both midfielders are out of contract at the end of the season and they’re free to sign pre-contract agreements with non-English clubs from January 1st.

Kante, in particular, has been a major factor in the club’s success in recent years and he’s attracted interest from Paris Saint-Germain.

Chelsea are desperate to keep the former Leicester City ace but the deal they’ve offered Kante is on reduced terms from the £300,000-a-week deal he signed in 2018.

The Frenchman has suffered major injury problems in the last three years and he hasn’t featured for Chelsea since August after undergoing hamstring surgery.

Talks have therefore needed to be delicate but the Times reports that Chelsea feel Kante wants to stay at the club and that he’s ready to sign a new deal.

Jorginho has attracted interest from the likes of AC Milan and Juventus, and the Italian has made no secret of his desire to eventually return to his home country.

But the former Napoli man is enjoying his football under Graham Potter and the club feel their latest offer will be enough to convince him to sign an extension.

Midfield is an area that Potter wants to strengthen and he’ll wait until the summer to secure his top targets if they’re not available this month.

Jude Bellingham is considered a priority but the competition for the Dortmund ace is strong.

Enzo Fernandez starred for Argentina at the World Cup and the Benfica ace has a £110m release clause.


MORE : Christ the Redeemer turns green and yellow for Pele with Brazil set for three days of national morning