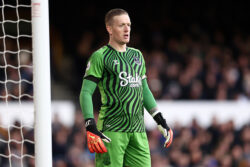 Chelsea, Manchester United and Tottenham are all reportedly considering a move for Jordan Pickford amid uncertainty surrounding his Everton future.

Pickford has just 18 months left on his deal at Goodison Park, and with Everton continuing to struggle near the bottom of the Premier League, the goalkeeper has been linked with a move away from Merseyside.

However, reports suggested that the 28-year-old was content to stay and had agreed to a new five-year contract prior to heading to the World Cup with England.

But the MailOnline claim that the club’s board are now having cold feet over the new deal despite Frank Lampard’s desire to tie Pickford’s future down.

This has in turn given hope to the Blues, Red Devils and Spurs who are all looking to sign a new keeper either in January or next summer.

Edouard Mendy has reportedly turned down multiple contract offers from Chelsea amid poor performances this season, and while Kepa Arrizabalaga has improved it remains to be seen if his turnaround in form is enough for Graham Potter.

David de Gea’s contract at United expires at the end of the season, with Erik ten Hag keen to bring a new keeper in who is more comfortable on the ball, an attribute Pickford is well-regarded for.

Antonio Conte is also on the lookout for Hugo Lloris’ successor after the Tottenham captain recently celebrated his 36th birthday.

After bursting onto the scene with Sunderland, Pickford moved to Everton in 2017 and while the Toffees have struggled since then, he has performed to a great standard, keeping 57 clean sheets in 214 appearances.

He has also established himself as Gareth Southgate’s no.1 amid stiff competition from the likes of Aaron Ramsdale and Nick Pope, helping the Three Lions to the semi-finals of the 2018 World Cup and the final of Euro 2020.

Whether the contract situation has affected Pickford’s desire to stay at Everton remains to be seen, but Lampard insists his player’s loyalty is with the Toffees.

The manager recently said: ‘Jordan feels very happy being at this club, I don’t want to speak for him but that’s the impression I get from him.

‘I feel we can match his ambitions. We’re a huge club with a huge history and big ambition and he’s a big part of that. If Jordan feels like that, we can match each other’s ambitions and in terms of getting him to stay longer, I don’t see that as a problem.’

He has just 18 months left on his current deal.