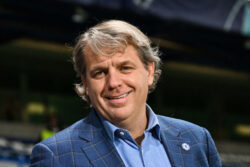 The Blues are keen to sign a new left-sided centre-back, having targeted Josko Gvardiol last summer and kept tabs on the Croatia international during the first-half of the 2021-22 season.

But Gvardiol is being monitored by a number of top clubs and Chelsea are concerned his valuation will only increase after an impressive World Cup campaign.

As a result, Chelsea have begun to look at alternative targets, identifying Badiashile, Evan N’Dika and Piero Hincapie as possible January signings.

According to The Athletic, Chelsea have already opened talks with Monaco over a deal for Badiashile, who made his international debut for France earlier this year.

While there is no agreement between Chelsea and Monaco, it is claimed that Stamford Bridge chiefs now expect to complete a deal for the Frenchman worth £30m.

The Blues have begun talks to sign Benoit Badiashile from Monaco (Picture: Getty)

Badiashile, 21, certainly fits the bill and would create competitive and cover at Chelsea alongside the likes of Thiago Silva, Kalidou Koulibaly, Trevoh Chalobah and Fofana.

The Monaco star has made 135 appearances for the Ligue 1 outfit and has two caps for France, although he was not named in their World Cup squad for Qatar.

Chelsea play their first competitive game in over six weeks on December 27 as they welcome Bournemouth to Stamford Bridge.

Graham Potter’s side lost three games in a row before the World Cup break to slip to eighth in the table, eight points outside the Champions League places.

Making his prediction for Chelsea’s clash with Bournemouth, former Premier League striker Chris Sutton told BBC Sport: ‘Chelsea are desperate for a win after going six domestic games without a victory, and losing the past four of them, so the pressure is really on Blues boss Graham Potter here.

‘I am a strong believer that Potter just needs time to get things right at Stamford Bridge, but they have had issues with scoring goals since he took charge and they will need to finish their chances against Bournemouth, as well as create them.

‘I do expect Chelsea to win this game but it is going to be interesting to find out what happens with the Cherries next too.

‘Gary O’Neil’s success as their caretaker boss meant he definitely deserved to be appointed on a permanent basis but, to keep the job, he needs to match those results now. Chelsea 2-0.’

Todd Boehly and his team have opened talks.