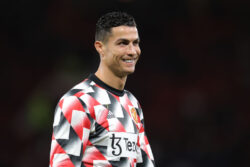 Cristiano Ronaldo tried to force a move away from Man Utd in the summer (Photo: Getty)

Chelsea are reportedly plotting to sign Cristiano Ronaldo in January, having failed to land the Manchester United superstar in the summer.

In the most recent transfer window, Chelsea were one of the teams heavily linked with Ronaldo, with the 37-year-old desperate to leave United for a Champions League club.

However, then-Blues boss Thomas Tuchel vetoed the move, something that angered owner Todd Boehly who was desperate to bring arguably the biggest name in world football to Stamford Bridge.

Ultimately, Chelsea ended up signing two big name forwards in the form of Raheem Sterling and Pierre-Emerick Aubameyang instead.

But Boehly has not given up hope of landing Ronaldo, and according to Sunday World, he will try again in January when the window re-opens in light of the player’s recent antics.

During last Wednesday’s 2-0 win over Tottenham, Ronaldo infamously refused to come on as a late substitute and subsequently stormed out of Old Trafford before the full-time whistle.

United boss Erik ten Hag punished his forward by leaving him out of the squad to face Chelsea on Saturday, a game that ended 1-1, and banishing him to training with the U21s.

Todd Boehly was desperate to bring Ronaldo to Chelsea in the summer (Photo: Getty)

Ten Hag has said that Ronaldo remains an important part of his team and plans for the rest of the season, but other reports suggest that the Portugal international has already played his last game for the Red Devils and a January exit is preferred by all parties.

Asked if United missed Ronaldo, Ten Hag said after the Cheslea draw: ‘Yes, always he can score a goal.

‘He is valuable for us and we need him that’s clear. I think you see it also in this game that he can finish off that’s quite obvious.’

Boehly is also more hopeful of the move now, given that Tuchel is no longer in the dugout, with Graham Potter now in charge, though it remains to be seen whether he shares the American’s desires.

The Blues attempted to sign Ronaldo in the summer.