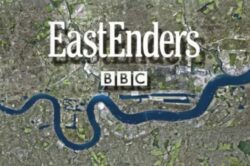 A star of the soap has been arrested (Picture: Supplied)

A former EastEnders star was arrested after allegedly being sent £80,000 by a pensioner who thought they were in a relationship.

A real-life drama played out away from Albert Square when the actress was probed for apparent ‘catfishing’ – pretending to be in her 20s.

The soap favourite – a household name who cannot be identified – reportedly offered online sexual ­services to the man for money.

Police said the pensioner, in his 80s, had met the woman on a matchmaking site and believed they were a couple. Relatives are said to have called in police after realising his savings had disappeared.

The TV regular is claimed to have asked others to deposit some of the money given to her by the man in their bank accounts.

She was charged on suspicion of ­conspiracy to commit fraud following a raid in east London in July.

Officers from a fraud unit seized ­documents and electronic devices after searching the property where she is currently thought to be living. Details of the allegations have only recently emerged, The Sun reported, adding that three other individuals – a 61-year-old woman and two men aged 38 and 34 – were also held on suspicion of fraud by false representation over the same suspected romance scam.

Knifeman on the run after killing woman and stabbing another

All four were released under ­investigation.

The phrase ‘catfishing’ was officially recognised by the Oxford Dictionary in 2014 and describes a person who ­pretends to be somebody else in order to attract others.

In the UK, 8,863 cases of romance fraud were flagged to the National Fraud Intelligence Bureau between November 2020 and October 2021.

The pensioner thought they were in a relationship.