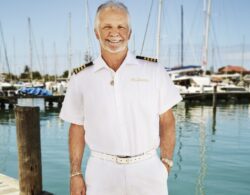 Captain Lee Rosbach made a surprise return to Below Deck (Picture: Bravo)

Below Deck fans can breathe a sigh of relief as Captain Lee Rosbach confirmed that he returned on board before the season ended.

The 73-year-old has been a staple of the wheelhouse and recently set sail on his 10th series in charge, shortly after undergoing an operation on his back.

However, he was forced to confirm his exit in last week’s episode after his health issues became too much – with Captain Sandy Yawn coming on as his replacement.

In a new interview published after the scenes aired, he opened up about the ‘proud’ moment that he jumped back on board.

‘I made a promise to the crew before I left that I would be back before they were done, before the season was over, and I would walk on board by myself unassisted,’ he said. ‘I’m happy to say that I was able to fulfill the promise.

‘That was a very proud moment for me. I wanted to be able to finish what I started.’

Captain Lee has been on the program since it first began in 2013, but was forced to sit out much of the current series due to health issues.

Throughout the season so far, viewers have seen the fan-proclaimed Stud of the Sea struggling and using a cane to get around the boat.

Sitting his staff down, he informed them of his plans to leave, adding: ‘As you guys know, I’ve been struggling with my mobility, and it’s been hard.

Captain Sandy Yawn stepped in as his replacement (Picture: Bravo)

‘And I’ve let you guys down, and for that, I apologize. So I’ve made a decision to leave the boat.’

Speaking to People Magazine, Captain Lee admitted that having to turn his back on his crew ‘was harsh’.

‘That’s something I’ve never done in my life,’ he continued. ‘I’ve never quit. I’ve never had to say I quit. And it was really, really hard to admit, especially to myself, that there’s something out there that kicked my ass. That was a hard pill to swallow.

‘I was close to tears because it just means that much to me. And to be able to instill that in other people, that same sort of caring and see it take place, it’s like, “Yeah, I’ve done good.” To have to walk away from that was just harsh.’

Below Deck airs on Mondays on Bravo in the US and is available to stream on hayu on the same day.