Calls with Zelensky, Biden and Sturgeon top of the list as Rishi gets to work 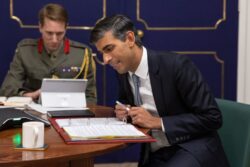 Rishi Sunak has held a series of calls with key allies and devolved leaders from Downing Street (Picture: Twitter/Number 10)

Rishi Sunak has moved to assure Ukraine’s president that the UK’s commitment to its war effort hasn’t wavered despite months of political turmoil.

He is the third British prime minister Volodymyr Zelensky has worked with since the February invasion began and the new partnership was kicked off with a call from Downing Street.

Mr Sunak has also spoken to his counterparts in the US, Scotland and Wales in the customary round of conversations designed to ensure smooth continuity in relations with key allies and devolved leaders.

He promised the Ukrainian leader that support and assistance would be as ‘strong as ever’ in his first foreign policy action as PM after making a series of appointments to his cabinet.

Mr Sunak wrote on Twitter that ‘both he and the Ukrainian people can count on the UK’s continued solidarity and support’.

Mr Zelensky described it as an ‘excellent conversation’ with the pair agreeing to ‘write a new chapter’ in relations between the two countries.

A Downing Street spokesperson said: ‘Both leaders agreed on the need to continue to place pressure on Putin’s barbaric regime through continued economic sanctions.’

The prospect of an in-person visit to Ukraine for Mr Sunak was raised during the conversation.

Mr Sunak also held a phone call with Joe Biden and the pair said they were committed to ‘working closely’ together.

Relations between successive Tory governments and the Democratic administration have been strained over concerns in Washington about the impact of Brexit on Northern Ireland stability.

The PM will hope to solve tensions across the Irish Sea in a way which revives chances of trade talks between the UK and US.

Ms Truss spoke to neither during her brief spell in Downing Street, a perceived snub which was seized on by critics in both countries.

Emmanuel Macron said in a statement he looked forward to working to ‘tackle the challenges of the moment, including the war in Ukraine and its many consequences for Europe and the world’.

Mr Sunak will be hoping to get relations with Paris off to a better start than his predecessor, who triggered a minor diplomatic spat by declining whether to say the French president was a ‘friend or foe’.

The work will continue for the new PM tomorrow with a cabinet meeting due to be held at 9.30am.

Mr Sunak will then travel to the Commons for his first prime minister’s questions session.

The new prime minister has held brief talks with key allies after taking charge of Number 10.