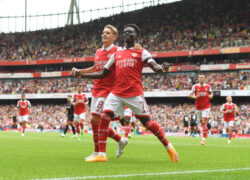 Saka opened the scoring on the south coast before Odegaard doubled the Gunners’ lead before half-time.

The win took Arsenal seven points clear of champions Manchester City going into 2023 and few would bet against the Gunners ending their title drought in their current form.

Saka and Gabriel Martinelli have been the star performers for Arsenal so far this term but Odegaard has been quietly effective, particularly in imposing Mikel Arteta’s style of play into the side.

The Norwegian provided a sublime assist for Martinelli to finish off the win against Brighton and he was awarded Man of the Match after the win.

And Saka was full of praise for the playmaker, describing the captain as the ‘orchestra’ of the team.

‘He does so much for the team. He is the orchestra of our team. He is a really efficient captain. He does a lot of talking on the pitch.’

‘We would bite your hand off!’ – Bukayo Saka reacts to Arsenal’s seven-point lead

Arsenal’s win came after dropped points from rivals City against Everton earlier in the day.

Saka admits the draw gave his side ‘extra motivation’ to win against the Seagulls.

‘We just try and focus on ourselves but when we heard that result it gave us extra motivation to try and press on and get a result today.’