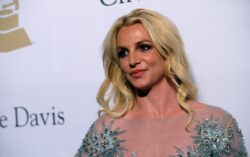 Britney Spears has made a commitment to herself (Picture: Scott Dudelson/Getty Images)

Britney Spears has been reminiscing on the day she, erm, married herself.

Of course, Britney, 41, officially married model Sam Asghari, 28, on June 9 last year, after meeting in 2016 when Sam appeared in one of her music videos.

While the ceremony was intimate, the after party was bursting with stars, with the likes of Paris Hilton, Madonna, Selena Gomez and many more on the guest list.

The whole thing was definitely a fairytale, even if the bride and groom did defy tradition in several ways, like not having a first dance or someone to walk Britney down the aisle, making the day their own.

Now though, the Toxic hitmaker has suggested another type of ceremony took place, in which she made a commitment to herself.

Sharing a throwback snap, the singer looked stunning, wearing a white flowing gown and a veil – definitely looking the part to walk down the aisle.

The singer posted a photo of herself wearing a wedding dress and veil (Picture: Instagram)

Brit has shared several snaps from the day in question before, previously revealing that the beautiful veil belonged to her great great grandmother.

Towards the end of last year, she confirmed that she married herself because she was ‘bored’, but assured she was still loved up with her husband.

Britney and Sam Asghari have been together since meeting on her music video set in 2016 (Picture: Instagram)

Doubling down on her statement, her next post was a picture from her actual wedding, showing her and new husband Sam kissing.

Britney has since turned off the comments on her Instagram posts as while fans love to dish out the compliments, many have been ‘concerned’ that there was something more sinister going on behind the scenes.

Sam has shut down such claims, though, recently denying that he has control over her.

When asked about the speculation that Britney wasn’t running her own social media by TMZ, Sam replied: ‘I don’t even control what we have for dinner.’

He continued: ‘In the past, there has been a lot of stuff going on so I understand where [some fans are] coming from. They’re just being protective. If anything they’re being good fans.’

Therapist reveals the five signs your relationship is on the rocks

The ‘stuff’ of course, refers to Britney’s 13-year conservatorship, from which she was freed in November 2021.

Britney’s father Jamie previously managed Britney’s well-being and financial affairs along with a bank, but the mother-of-two told a court that the conservatorship was ‘abusive’, leading to her freedom.

She made a commitment to number one.