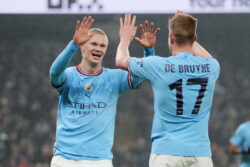 Manchester City are into the quarter-finals of the Carabao Cup after beating Liverpool 3-2 in a memorable game at the Etihad on Thursday night.

The high-quality, high-pace, high-drama we have come to expect from these two sides was all on display, but in truth, although the scoreline was tight it was City who were obviously the better side.

Kevin De Bruyne was at his amazing best, putting chances on a plate for his teammates and clearly leaving his World Cup woes with Belgium behind him.

Liverpool were second best but fought hard and twice levelled up in the game, first through Fabio Carvalho after Erling Haaland had put City ahead, then through Mohamed Salah after Riyad Mahrez had scored the home side’s second.

However, they could not bounce back for a third time and Nathan Ake’s header on 58 minutes, from a De Bruyne cross, proved to be the winner and take City into the last eight.

It was a bright start from the Premier League champions and they were ahead just 10 minutes in when Haaland volleyed past Caoimhin Kelleher.

It was a smart finish from the Norwegian phenom, but the assist was arguably more eye-catching as De Bruyne swung in a pin-point cross from the left, with his weaker left foot.

What a finish that is! ð

Erling Haaland is BACK! ð¥ pic.twitter.com/H8KMjQC3mf

City were certainly the better team for most of the opening half, looking impressively sharp after the World Cup break, but suddenly Liverpool were level 10 minutes after the opener.

Joel Matip carried the ball out of defence and impressively slid in James Milner in the penalty box before the veteran squared to Fabio Carvalho.

The youngster was calm, sweeping past Stefan Ortega with a first time finish to level the scores.

It was good stuff from the Reds but Pep Guardiola’s side went back to dominating and really should have been ahead before the break.

Ilkay Gundogan had two decent chances, the first a very good one and well saved by Kelleher, while Nathan Ake also had a great opportunity, getting on the end of an immense De Bruyne cross, this time from the right. However, his header was turned away by Kelleher.

James Milner had been replaced by Nat Phillips late in the first half, with Liverpool making two more substitutions at half-time as Alex Oxlade-Chamberlain and Fabinho entered the fray.

The start of the second period was chaos, with two goals in the first five minutes as City again went ahead and Liverpool again bounced straight back.

First Riyad Mahrez scored a trademark goal bringing down a floated pass from Rodri perfectly, onto his left foot before curling the ball past Kelleher into the far corner.

Remarkably the lead lasted just a matter of seconds as Darwin Nunez broke with impressive pace down the left and found Salah with a cut-back who just had to poke home as Ortega had come out to face the Uruguayan and left his goal unguarded.

WOW! What a game this is! ð¥

City were undoubtedly the better team, though, and with De Bruyne seemingly at his unstoppable best, they were ahead again before the hour mark.

The brilliant Belgian put in an in-swinging cross from the left after a short corner, again finding Ake, but this time the Dutchman found the back of the net to make it 3-2 to the home side.

Another inch-perfect cross from Kevin De Bruyne and Nathan AkÃ© makes no mistake with his finish! ð¥ pic.twitter.com/8wbOmCkLBg

Liverpool were not out of it by any stretch and remained a threat, chiefly through Darwin Nunez but his finishing over the piece was pretty poor. He went through in the inside right channel just after the 70 minute mark and dragged his effort wide.

It had been a fairly good natured affair until things spilled over 78 minutes in as City players fumed about a challenge Fabinho made on Rodri. The Spanish midfielder was angry himself, while Gundogan shoved the Brazilian to the floor, but order was swiftly restored.

They were fighting hard but Liverpool could not fashion another good chance really, with City looking the more dangerous even though they did not need to score and they played out the win in a memorable contest.

The defending champions are out.