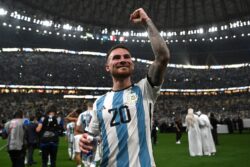 Brighton chief executive Paul Barber says the club has no intention to sell Alex Mac Allister this month, although accepts there will be a lot of interest in the midfielder.

The 24-year-old had already been attracting attention for his performances with the Seagulls, but his reputation went through the roof after winning the World Cup with Argentina.

Mac Allister played a big role in the South American side’s triumph in Qatar and the likes of Manchester United, Liverpool and Chelsea have all been linked with a big-money move for him.

Barber is well aware that big clubs will be looking to swoop for one of Brighton’s best, but is confident that he will not go anywhere in January.

‘In an ideal world our squad, which is as good as it has been for a long time, will remain intact through the whole of January and we will go into the second half of the season as we are,’ Barber said, via The Argus.

‘The next 30-odd days is unpredictable and we will deal with whatever comes in. But we are not offering anyone to anyone.’

On whether there has been any contact regarding the Argentine, he said: ‘No – and we don’t want any. We are quite happy as we are, certainly for as long as we can be. But we are also realistic.

‘Alexis Mac Allister has just won a World Cup at 23 years of age and has had a fantastic season with us.

‘We can’t be surprised when there is interest and at some point we have to accept that these players will go on to play at an even higher level than ours.’

‘We know there is going to be interest.’