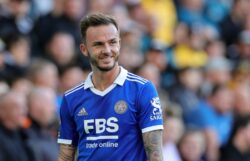 Brendan Rodgers has refused to give a timescale on James Maddison’s knee injury after the midfielder missed Leicester City’s Premier League clash with Newcastle United on Boxing Day.

The 26-year-old was part of England’s World Cup squad but did not play a single minute in Qatar and was hampered by his knee issue throughout the tournament.

Maddison was unable to make the bench for Leicester’s first game back after the World Cup break as they hosted Newcastle United at the King Power Stadium.

When asked about Maddison’s absence for the game, Rodgers told Amazon Prime: ‘He’s still suffering with his knee

‘We’re just trying to get to the bottom of it with the medical team.

‘He was out this morning and he just doesn’t feel quite right, so we’ll just have to assess that and see how we go.’

When asked about his return, Maddison said: ‘The gaffer [Rodgers] gave us a little bit of down time.

‘Because a major tournament can take a lot out of you, mentally and physically, so I had a little bit of down time, a few days away, and nearly back at it.’

‘We’re just trying to get to the bottom of it with the medical team.’