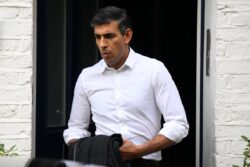 The former chancellor Rishi Sunak has announced his official bid to become the next leader of the Tory party and prime minister, just six weeks after he lost out to Liz Truss.

It’s the second attempt at the top job for Sunak in a matter of months after Liz Truss resigned just 44 days into her premiership.

Publicly, Rishi Sunak has the backing of at least 124 MPs allowing him to proceed to the next round.

If any other candidate also has passed the 100 thresholds they will then join Sunak in round 2. If by Monday 14:00 only Rishi Sunak has more than 100 MPs backing him, he will automatically become PM.

Will Rishi Sunak be the next prime minister?

Rishi Sunak served as Chancellor under Boris Johnson and was seen as a safe pair of hands when it came to the country’s money. He was praised for steering the UK economy through the pandemic and its lockdowns.

During the summer leadership race, Sunak offered dire warnings about Liz Truss’s economic plans – calling them “fairytale economics”, something he clearly got right.

Sunak has credibility with the markets and the most important thing for the incoming leader is ensuring the markets are calm, that’s why he’s the most obvious choice for PM.

With Hunt in the Chancellor role and Sunak keeping a close eye, the markets will start to feel reassured. It certainly won’t do any harm having Sunak’s knowledge and experience in No 10 and overseeing No 11.