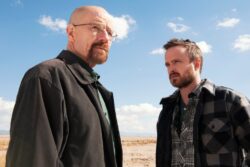 Walter White is about to be back on our screens a decade after Breaking Bad ended (Picture: AMC/Frank Ockenfels )

Breaking Bad may have ended with Walter White suffering a brutal fate, but Bryan Cranston has shared an image showing he will be back on our screens soon.

The hugely popular series, which centred on the high school chemistry teacher who turned to a life of crime after being diagnosed with terminal cancer, saw him meet his end in the final ever episode in 2013.

Producing and distributing methamphetamine alongside former student Jesse Pinkman (Aaron Paul), Walter was accidentally shot by a remote-activated machine gun, with the TV show’s creator revealing years later that he had in fact been killed.

Now, a decade on, Walter is seemingly alive and well, and working on a different project after his recent Better Call Saul cameo – promoting popcorn chips at the Super Bowl.

In the photo Walter (or Heisenberg) is standing in the desert wearing his iconic hat, glasses, button-up shirt and jacket while staring out into the desert.

Walter will be promoting a snack at the Super Bowl (Picture: Bryan Cranston/Instagram)

Fans have gone wild for the news, and while some initially thought the photo might suggest a new season, just seeing him again briefly was enough for others.

One person commented: ‘THE GOAT IS BACK 🐐,’ using the acronym to dub Walter the ‘greatest of all time’, while another shocked Instagram user simply put: ‘Holy cow.’

However others did have some queries about the ingredients in the product.

Many comments flooded Bryan’s Instagram post, with questions asking ‘what’s the secret ingredient?’ to others declaring that these were ‘my new favourite chip’, before even having a taste.

This person understandably had some questions about what Walter’s been cooking (Picture: Twitter)

Walter will be seen in the Super Bowl commercial during the game, which will be played on Sunday February 12, although previews of the ads are typically released about a week before.

While it may come as a surprise to fans that Walter is helping to peddle a product like this, Bryan and his former co-star Aaron recently released a mezcal, which they labelled Dos Hombres.

Although Breaking Bad wound up in 2013, in the years since Bryan has reprised the role in cameos for El Camino: A Breaking Bad Movie and in the final season of Better Call Saul last year.

Although there’s no sign of a reboot for that series, last year Frankie Muniz teased that there could be one in store for Malcolm in the Middle, which he suggested could be written by his former co-star and on-screen dad Bryan.

He said: ‘I know Bryan Cranston is really into the idea and he’s kind of heading writing the script and getting everything rolling. So, there might be something. I would be down 100%.’

Breaking Bad is streaming on Netflix.

Walter’s been cooking up a new project.