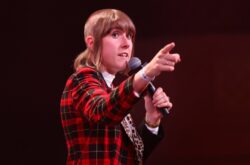 Maisie Adam was all of us when she met Lioness Millie Bright while filming Big Fat Quiz of the Year (Picture: Getty Images)

Maisie Adam was extremely relatable to millions of people as she freaked out by coming face to face with her hero Millie Bright.

The comedian was taking part in Channel 4’s Big Fat Quiz of the Year, hosted by Jimmy Carr, when she and the other panelists were surprised by the Lioness.

Superfan Maisie had just scolded Jimmy for not having any questions about England’s massive win in the 2022 women’s Euros this summer, which saw the team crowned the champions, in the sports round of the quiz.

She repeatedly expressed that the day of the win was the ‘best day of my life,’ utterly gushing over how much the Lionesses meant to her.

And then icon Millie walked straight on set to read out the next question.

Of course, Maisie immediately freaked out, first standing up in her seat as though preparing to sing the national anthem, and then was unable to sit back down again, nervously shouting: ‘I’ve gone weird!’

Millie totally freaked out and panicked she was unable to hold a conversation (Picture: Getty Images)

Millie surprised the quiz panelists as she walked on set to provide a question (Picture: Getty Images)

She eventually stumbled, starstruck, over to Millie and asked if she could wear the winners’ medal the footballer had brought with her.

She then appeared to be unable to say anything other than the day fo the Euros finals was the best day of her life, and eventually asked host Jimmy to help as she was literally unable to try and make any more conversation.

Maisie’s reaction caused a huge reaction among viewers, with plenty admitting they’d be in the same state if they were to meet any of the Lionesses.

‘Your reaction to meeting with your hero was adorable. It may have brought a [tear] to my eye.,’ one person wrote.

‘Top tier fangirling over Millie Bright. I feel I would be exactly the same!’ another said.

One said watching Millie getting ‘starstruck was so damn wholesome,’ while one joked ‘Find someone who looks at your the same way [Maisie] looks as [Millie].’

And another described Maisie ‘being a huge Lionesses tan’ as ‘absolutely iconic.’

@MaisieAdam, just seeing Maisie be starstruck was so damn wholesome.

Congrats on the wedding ð I am getting married next year, too! #BIGFATQUIZ

Find someone who looks at you the same way @MaisieAdam looks at @Mdawg1bright. #BigFatQuiz #Channel4

Love how excited @MaisieAdam is at every guest on #bigfatquizoftheyear – itâs very joyful in what was generally a pretty difficult year!

Host Jimmy, as usual, didn’t hold back, and among his many digs was a brutal swipe at the new King Charles III.

The new monarch, when still Prince of Wales, had appeared on BBC soap EastEnders in June to mark Queen Elizabeth II’s Platinum Jubilee.

The then-Prince starred on a special episode alongside his wife Camilla, now Queen Consort.

And while they may have seemed out of place on the super-dramatic show, in Jimmy’s eyes they fit right in.

Hosting Channel 4’s Big Fat Quiz of the Year on Monday, Carr reflected on the royal couple’s cameos on the series.

Addressing the audience, he joked Charles was perfectly suited to the soap as he is ‘a love rat whose wife died in mysterious circumstances’ which was totally in line with EastEnders plotlines.

The comedian was of course referring to the affair between Charles and Camilla while the now-King was married to Princess Diana, who was later killed in a car accident in Paris.

Charles and Camilla had filmed the scenes back in March, months before the Jubilee itself, during which they chatted with actors Rose Ayling-Ellis, Letitia Dean, and Danny Dyer.

The Big Fat Quiz of the Year is available to watch on All 4.