‘Beyond horrifying’: Despair at shock return of Suella Braverman 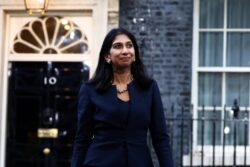 Suella Braverman won’t be getting a welcome-back party from rights groups (Picture: Reuters)

Refugee rights groups have little hope Suella Braverman will show ‘any more humanity’ as she becomes Home Secretary for a second time.

Braverman, a hard-liner unapologetic about her ill feeling towards more immigration, resigned only a day before Liz Truss over a serious security breach.

But there was a sense of déjà-vu today when Rishi Sunak, officially Britain’s third prime minister in seven weeks, brought Truss’ pick for Home Secretary back.

The daughter of Kenyan and Mauritian immigrants, Braverman has said seeing a plane taking asylum seekers to Rwanda by Christmas is her ‘dream’.

While in her razor-edged resignation letter, she accused the government of breaking 2019 manifesto promises and, in particular, failing to cut immigration.

So to see Sunak, himself the son of Indian immigrants, reinstall the Fareham MP sent shudders of fear and frustration among refugee rights groups.

Both the prime minister and the Home Secretary have supported forcibly deporting some asylum seekers to Rwanda (Picture: Simon Walker / HM Treasury)

‘Rishi Sunak promised a fresh start from the huge mistakes made by Liz Truss during her short time in office,’ he told Metro.co.uk.

‘His decision to bring Braverman back as Home Secretary suggests he intends to repeat them.’

He added: ‘This is an appeasement of the right wing of the Conservative party which will only cause problems for Sunak further down the line.’

There’s already been tough talk on immigration from the Tories over the last 12 years, Crawshaw said, but Braverman is about to amp it up to ’11’.

‘It seems unlikely she will show any more humanity during her second stint as Home Secretary,’ he added.

Tim Naor Hilton, chief executive of Refugee Action, said the Tories must be reminded that migrants aren’t just numbers to be decreased and debated.

Suella Braverman, herself the daughter of migrants, Getty Images

‘It’s beyond horrifying that anyone who dreams and obsesses about being cruel to human beings who have fled war, torture and persecution should be put in charge of their safety,’ Hilton said.

‘The government must come to its senses and realise that hostility to refugees is inhumane and ineffective.

‘It must commit to building an accessible protection system that’s built on compassion and justice.’

Introduced under Boris Johnson’s government, Sunak has vowed to press ahead with plans to deport asylum seekers to Rwanda before their refugee claim is even assessed.

But to the relief of rights groups, not a single asylum seeker has been given a one-way ticket to the African nation amid court cases and a lack of willing airlines.

An airline contracted by the government to transport asylum seekers pulled out last week (Credits: PA)

Mark Davies, head of campaigns for the Refugee Council, which works with refugees in Britain, hopes Braverman will do one thing — listen to the public.

‘Government policies on asylum and refugee protection are causing untold harm to many thousands of people fleeing war, persecution and conflict,’ he said.

‘They are also out of step with public opinion — polling consistently shows overwhelming support for helping those who are forced from their homes and seek asylum in the UK.’

One in two Brits believes the Rwanda scheme is unworkable and unlikely to succeed in its aim of reducing the number of people crossing the English Channel.

‘We sincerely hope ministers in the new government are prepared to listen and engage on this issue in a way which reflects its importance and its impact on the lives of so many people,’ he added.

Pro-refugee groups have widely condemned the Rwanda plan, a policy they see as a solution to a problem that doesn’t exist (Picture: Vuk Valcic/ZUMA Press Wire/Shutterstock)

A plane operated by the Spanish charter airline became the centre of a legal firestorm and was halted after the European Court of Human Rights stepped in.

In a letter to Freedom from Torture, which campaigned to pull the breaks on the June flight, Privilege Style said it had ‘suspended’ the contract.

Given that two other charter airlines already distanced themselves from the deal, the government — Braverman included — is running out of options.

‘Braverman’s “dream” of flying refugees to Rwanda by Christmas,’ said Crawshaw, ‘seems even further from realisation.’

‘It seems unlikely she will show any more humanity during her second stint as Home Secretary.’