Beyonce confirms Renaissance tour for 2023 and auctions first tickets for $50,000 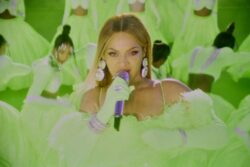 Beyonce will be hitting the stage next summer (Picture: AFP via Getty Images)

Beyonce has subtly announced when her Renaissance tour will take place in 2023 – and the first tickets sold for an eye-watering price just minutes later.

Fans have been anxiously awaiting news on when the Single Ladies hitmaker will finally perform her Renaissance album live on stage.

Her seventh studio album was released in July but Beyonce, 41, had remained radio silent on when she’ll embark on a world tour and hasn’t even released music videos to accompany songs such as Cuff It, Break My Soul and Alien Superstar.

Well, part of the mystery appears to have been solved when Beyonce and husband Jay Z attended this year’s Wearable Art Gala in Santa Monica, California on Saturday hosted by her mother and stepfather, Tina Knowles-Lawson and Richard Lawson.

Footage from inside the event has emerged on social media and reveals that Queen Bey kindly put a ‘concert ticket package’ up for auction for the Renaissance world tour – the Wearable Art Gala is a fundraiser to support WACO’s (Where Art Can Occur Theatre Center) artistic and mentorship programs.

A listing appeared on-screen at the event and read: ‘Concert Ticket Package. Valued at a total of $20,000, United x WACO offers you a chance to see Beyonce on her Renaissance Tour starting in the Summer of 2023 at any of United’s national and international destinations around the world.

The first special ticket to see BeyoncÃ© on her next tour was sold at a $50,000 auction. #RenaissanceWorldTour pic.twitter.com/9C9UCbsvN6

‘This prize is complete with 2 First Class International United Airline Polaris tickets to select cities, with 3-Night hotel accommodations at a Marriott property.

‘And, to one of the most sought-after musical performances of all time, 2 concert tickets to Beyonce’s Renaissance 2023 Tour with a guided backstage tour with Miss Tina!’

Beyonce is yet to announce the official spate of Renaissance tour dates but it looks like fans should get their coins ready in anticipation of a world tour for 2023.

The Grammy-winning singer honoured the gala’s theme of celebrating Harlem in the 1920s-50s as she was seen sporting big bouncy curls and a black satin strapless dress teamed with hot pink gloves.

She was joined by eldest daughter Blue Ivy, who was seen in a video clip wearing an electric blue suit and braids.

Beyonce season is well and truly upon us as she has received six nominations at the American Music Awards, which are set to take place in California on November 20. Nominations include favourite pop album and favourite pop song, which will see her face off against Taylor Swift – who has also received six nods – for both of those trophies.

It’s all for a good cause.