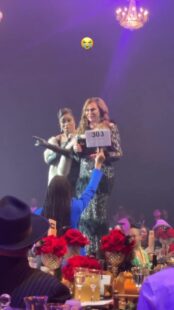 Blue Ivy Carter was at the Wearable Art Gala in Los Angeles on Saturday night and stunned her grandmother Tina Knowles-Lawson, 68, and Keke Palmer, 29, who were acting as auctioneers for the event, with her move.

In a video from the event, shared on Abbott Elementary star Quinta Brunson’s Instagram Stories, the youngster was seen starting to wave her auction paddle from the floor while her relatives were on stage.

This is not the first time Beyoncé and Jay Z’s eldest has pulled a stunt like this either, showing off her auction form.

Yes, Keke we’d look like that too (Picture: @quintab/Instagram)

She was head-to-head that year with producer Tyler Perry, 53, who didn’t know he was bidding against Blue Ivy.

He later told NBC’s Today Show: ‘Somebody else was bidding against me. I didn’t know who it was.

‘I look over and it’s her. She’s taking the paddle out of Jay’s hand and Beyoncé’s hand and she’s bidding.’

The celebrity auctioneer for the gala that year, Star Jones, 60, praise the fact that she was being taught the value of art, saying from the stage: ‘Her mother and father have been talking about how you gather art and that is a big deal for African Americans.’

Beyoncé also soft-launched the dates of her Renaissance world tour with a concert package at the auction (Picture: Kevin Winter/The Recording Academy/AFP)

Beyoncé’s mum Tina is co-founder of the WACO (Where Art Can Occur) Theatre Centre, which puts on the Wearable Art Gala every year to raise funds for artistic and youth mentorship programs.

Beyoncé is honorary co-chair alongside her sister Solange Knowles, 36, and opted to dress in Gucci for this year’s event, where she also subtly revealed that her Renaissance World Tour will kick off next summer.

The first special ticket to see BeyoncÃ© on her next tour was sold at a $50,000 auction. #RenaissanceWorldTour pic.twitter.com/9C9UCbsvN6

The superstar put a ‘concert ticket package’ up for auction for the Renaissance world tour in 2023.

World in shock after Boris pulls out: Johnson withdraws from race to be PM

The listing, which was valued at a total of $20,000, included two First Class international United Airline Polaris tickets to select cities, with a three-night hotel stay at a Marriott property, two tickets to the show and a guided backstage tour by Tina herself.


MORE : ‘Secret’ Star Wars film in the works with Damon Lindelof and Ms Marvel’s Sharmeen Obaid-Chinoy on board

We are clutching our pearls (or should that be diamonds?)