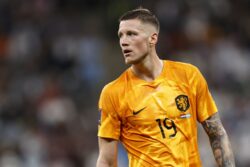 A January swoop for the Dutch striker may not be as easy as United hoped (Picture: Getty)

Besiktas are ready to play hardball over any deal for surprise Manchester United target Wout Weghorst while the striker’s agent has played down his ‘goodbye’ celebration.

The Red Devils are looking to bring in a new striker to provide cover and competition up top following the departure of Cristiano Ronaldo, though manager Erik ten Hag is restricted to a short-term loan signing.

United have limited funds available this month and have been linked with a host of cut-price deals or loan signings, with Weghorst the latest man in the frame to move to Old Trafford.

He added fuel to the speculation on Saturday evening when he appeared to say ‘bye bye’ to Besiktas’ supporters after scoring against Kasimpasa and looked emotional as he thumped the badge on his shirt.

But any deal is complicated by the fact Weghorst is on a season-long loan at the Turkish club from Burnley, meaning that agreement would need to be terminated first – which requires Besiktas’ consent.

After seeing the 30-year-old net eight times and lay on four assists in 16 Super Lig outings, Besiktas are reluctant to lose their most in-form player and had even been considering activating his €10million (£8.8m) buy clause.

Now Besiktas’ sporting director, Ceyhun Kazanci, has made it clear that they will only terminate Weghorst’s loan if they are suitably compensated – which means the deal might not be the cheap stop-gap United were hoping for.

‘I don’t understand why Weghorst said goodbye to the fans, why he made such a move. He is our football player right now. Our contract expires at the end of the season,’ said Kazanci.

‘If Manchester United or any other team wants Wegnorst, they will meet with Burnley anyway. Burnley will then contact us and discuss the terms of separation.

‘If we accept, the contract will be terminated. Otherwise, it will go on until the end of the season. He can’t just go.

‘There will have to be an incentive for us to approve the separation. I’ll give an example: if Burnley told us, “We made a deal with this team for Weghorst, we’ll give you half of the transfer fee” – this may be a different condition. Then we’ll sit down and talk.’

Meanwhile, Weghorst’s agent, Simon Cziommer, played down the significance of the striker’s celebration – and apparent goodbye to Besiktas fans – on Saturday night.

He told Turkish publication Fanatik: ‘Everything is fine. There is no problem. Wout just made a celebration.’

Nevertheless, talks are believed to be advancing and Burnley are hopeful of reaching an agreement with Besiktas to terminate Weghorst’s loan early, with the forward desperate to make the move to Old Trafford.

A January swoop for the Dutch striker may not be as easy as United hoped.