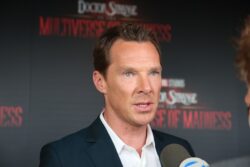 Benedict Cumberbatch’s family could be caught up in a row with Barbados (Picture: WireImage)

Benedict Cumberbatch’s family have reportedly been placed on a list of wealthy descendants that could be faced with a reparations fight with the Barbados government.

After the country sought independence from British monarchical control in 2021, officials have supposedly begun a campaign to seek reparations from descendants of former slave-owning families and plantation holders.

The Oscar nominee and his family have been placed under the watch of the island’s government after the star’s ancestry came to light.

It has been reported that the 12 Years a Slave actor’s seventh great-grandfather owned the country’s northern Cleland plantation in 1728.

He supposedly held ownership of the land until slavery was abolished in Barbados in 1834.

The site was said to have housed 250 enslaved people and it was also thought to have been the source of the Cumberbatch family’s small fortune.

The actor’s ancestors owned a plantation on the north side of the island (Picture: WireImage)

Benedict’s family was reportedly paid millions during the abolition of slavery in the country (Picture: FilmMagic)

Ahead of a court case between Barbados and conservative MP Richard Drax – that will set the precedent for this to be carried out – general secretary of the Caribbean Movement for Peace and Integration, David Denny, explained the thought process to The Telegraph.

He said: ‘Any descendants of white plantation owners who have benefitted from the slave trade should be asked to pay reparations, including the Cumberbatch family.’

It was previously reported Benedict’s mother advised him not to use his surname (Picture: Getty Images)

Despite the Cumberbatch family no longer owning the Cleland plantation, when slavery was abolished years ago, it was said the family cashed out to a sum worth around $1million (827,000) in British pounds.

Finding themselves in hot water in the past, the actor that starred in the movie depicting slavery revealed his mother had once warned him against using his real surname for fear of reparation claims, according to The Guardian.

He also is said to have suggested he took the role in order to atone for his family’s past with regards to their part in enslaving plantation workers.

When asked whether or not the famous family would face a financial squeeze from the newly independent state, local politician David Comissiong told The Telegraph, ‘This is at its earliest stages. We are just beginning.

‘A lot of the history is only really now coming to light.’


MORE : Benedict Cumberbatch is his own biggest fan as he rocks Doctor Strange cap after huge success of new film


MORE : Benedict Cumberbatch jokes he was ‘beat’ by Will Smith at Oscars in Saturday Night Live monologue

His family owned a plantation on the north side of the island.