Barbara Walters’ most memorable interviews, from questioning The Kardashians about their ‘talent’ to grilling Donald Trump 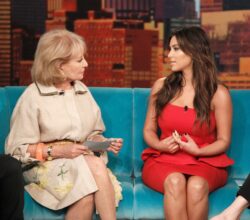 Barbara Walters was a pioneering broadcaster who throughout her decades-long career interviewed the likes of The Kardashians and presidents including Donald Trump.

The TV icon, who was the first US female network news anchor in 1976 on ABC, died at the age of 93 ‘peacefully in her home surrounded by loved ones’, her representative Cindi Berger said in a statement.

After a brief stint as a writer on CBS News, she launched her TV news career at NBC’s Today show, where she landed a job as a writer and researcher in 1961.

In 1979, Walters joined ABC’s feature programme 20/20, remaining as host until 2004, where she interviewed famous faces including Richard Nixon, Vladimir Putin and Monica Lewinsky.

Walters later went on to found daytime talk show The View, making frequent appearances as co-presenter until retiring from the programme in 2014.

Here we look back on some of Walters’ most memorable interviews, from Katharine Hepburn to Ricky Martin.

Kim, Kourtney and Khloe Kardashian, as well as Kris Jenner, were interviewed by Walters during the height of reality TV show Keeping Up With The Kardashians.

After grilling the famous family back in 2011, shortly before the Skims founder divorced Kris Humphries after just 72 days of marriage, Walters hilariously questioned their ‘talent’.

Khloe replied that they were ‘still entertaining people,’ while Kim explained: ‘I think it’s more of a challenge for you to go on a reality show and get people to fall in love with you for being you, so there is definitely a lot more pressure, I think for being famous for being ourselves.’

Walters became one of the first journalists to question Donald Trump, prior to his presidency, about his financial prowess and talent in 1990.

The interview came two years after the Apprentice judge had purchased Plaza Hotel for $407.5 million (£336m) and Walters challenged Trump over whether it was a ‘good deal.’

Trump said: ‘Well, I don’t know what the bankers have said. The Plaza is a very valuable property. Everybody told me “You paid too much, you paid too much.” Now, they’re all saying “What a great deal he made.”‘

Walters replied: ‘No, they’re not,’ with the then real estate mogul going on to sell the hotel at a loss of nearly $80m (£66m) five years later.

Walters sat down with Katharine Hepburn, who won four Oscars for Best Actress, for a series of interviews starting in 1981.

Throughout the conversation Hepburn, who starred in On Golden Pond and The Lion in Winter, made repeated references to trees or flowers, although it was later edited out.

But the constant allusions to nature led Walters to feel compelled to ask the Hollywood legend what kind of tree she would be in one of her most mocked questions.

Hepburn responded: ‘I hope I’m not an elm with Dutch elm disease, because then I’m withering. Everybody would like to be an oak tree. That’s very strong, very pretty.’

Ricky Martin sat down with the legendary broadcaster in 2000 during which she repeatedly encouraged him to set the record straight on the rumours about his sexuality.

Opening up about the interview with People 21 years later, Martin said: ‘When she dropped the question, I felt violated because I was just not ready to come out. I was very afraid.

‘There’s a little PTSD with that.’

The  Livin’ La Vida Loca singer came out as gay 10 years later in a statement on his official website.

Walters smashed ratings when she interviewed Monika Lewinsky back in 1999 just a year after her affair with president Bill Clinton was made public.

As well as apologising to Clinton’s wife Hilary and daughter, Lewinsky was asked if she still loved the leader to which she responded ‘no.’

Lewinsky added: ‘Sometimes I have warm feelings, sometimes I’m proud of him still, and sometimes I hate his guts. And, um, he makes me sick.’

Walters also memorably asked the former intern how she got the ‘nerve’ to flash her thong to Clinton, adding: ‘I mean, who does that?’

Lewinsky shot back: ‘If you take my word for it, it was a small, subtle, flirtatious gesture. And that’s me.’

Walters interviewed everyone from Ricky Martin to Katharine Hepburn.