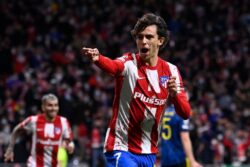 Joao Felix is available for a big move this month (Picture: Getty Images)

Atletico Madrid are happy to let Joao Felix leave the club this summer but not cheaply, wanting a £9.5m loan fee and a commitment to buy for £70.5m, according to reports.

The 23-year-old moved to Atletico from Benfica for an enormous £113m in 2019 but it has not worked out for him in the Spanish capital and after falling out with manager Diego Simeone he is being allowed to leave.

There is no shortage of interest in the Portugal forward, with Manchester United, Arsenal and Chelsea all linked with him on a loan deal in January.

The Mirror report that Atletico have set their price at £9.5m for a loan deal, with a commitment to buy Felix in the summer for £70.5m.

Manchester United have reportedly already had one bid turned down for Felix, with Atleti rebuffing a £3m loan fee bid from the Red Devils.

It seems that United have turned their attentions elsewhere, holding talks with Burnley over a surprise loan move for Netherlands striker Wout Weghorst.

The 30-year-old has spent the first half of the season on loan at Besiktas but could be brought back to England to make another loan switch to Old Trafford.

Arsenal are still pursuing Shakhtar Dontesk winger Mykhailo Mudryk, but it is proving to be a tough deal to complete as the Ukrainians want around £85m for their star player.

Chelsea have also been linked with Mudryk, with Shakhtar hoping to take advantage of the interest and encourage a bidding war between the London clubs.

The 23-year-old is no longer wanted at Atletico Madrid.