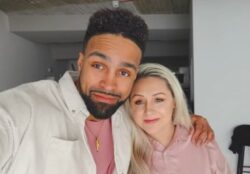 Ashley Banjo and Francesca Abbott announced they had separated after 16 years together in December (Picture: Instagram)

Ashley Banjo and his ex-wife Francesca Abbott are still very much on good terms since announcing their split.

The Diversity star and his childhood sweetheart shared last month that they had parted ways after 16 years together, confirming that they actually made the ‘difficult decision’ to separate 18 months ago but kept it private.

Ashley, 31, shares two children – Rose, four, and Micah, two – with his Francesca, has continued to co-parent his little ones, and recently enjoyed a family day out to London.

Sharing snaps from their cute outing, the 2009 Britain’s Got Talent winner posted a picture of daughter Rose, who couldn’t have looked happier in a pair of heart-shaped glasses and a matching pink dress.

It wasn’t long before dad Ashley had the sunnies on himself, pouting in a silly selfie alongside his eldest as they watched a musical together.

After watching Blippi: The Musical, youngest Micah joined in with the hilarious selfies, staring down at the camera while the dad and lad made funny faces.

Dad Ashley joined in the fun with a silly selfie (Picture: Instagram)

Ashley joked in the caption: ‘Not his best angle tbf,’ with a crying laughing emoji.

Joining in on the family fun, mum Francesca shared her own picture of Rose, who was engrossed in conversation with her cousin inside the theatre.

The adorable pair also seemed very entertained by the sunglasses from previous pics, with Francesca later telling fans that toy glasses had been the ‘best £1 Primark buy ever!’

Francesca also reposted a clip of the family walking through Piccadilly Circus, with Ashley carrying Micah in his arms.

Youngest Micah posed with a funny face as he watched a musical with his parents (Picture: Instagram)

Ashley carried his youngest in his arms as they walked through the capital (Picture: Instagram)

Ashley and his ex, who got together when they were teenagers and married in 2015, said when they split that their ‘beautiful children’ were their main priority.

They have since celebrated Christmas together, sharing a series of happy snaps to Instagram as the foursome went on winter walks and played with their new toys.

Ashley and Francesca – who is also a dancer – have admitted the separation process ‘has not been easy’, nor has it been ‘fast by any means.’

Ashley and Francesca assured that their children remain their top priority after splitting (Picture: Instagram)

However, ahead of entering 2023, the former couple felt it was the right time to let the world know.

Assuring that they will remain ‘the best of friends to each other’, the pair added in a statement in December: ‘Every decision that has been made is to make sure we can continue as a loving family and give the very best of ourselves as parents.

‘Raising Rose and Micah in a healthy and happy environment is the most important thing to both of us.

‘Sometimes after so many years people just move in different directions, but we do so lovingly and we continue to try and be both the best parents possible and the best of friends to each other.’


MORE : Love Island’s Adam Collard claims he’s a ‘hopeless romantic’ and is moving on from his ‘ruthless’ past

They’re still the best of friends.