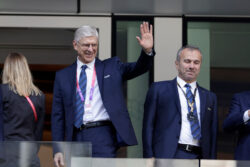 Arsenal are set to build a statue of legendary manager Arsene Wenger outside the Emirates Stadium, according to reports.

Wenger spent 22 years in charge Arsenal between 1996 and 2018 and despite leaving in controversial circumstances – which he later described as ‘unjustified’ and ‘very brutal’ – he is still considered as one of the best managers of all time.

He led Arsenal to three Premier League titles – including in 2003-04, when they completed an Invincible season by finishing the top-flight campaign unbeaten – as well as seven FA Cups in a huge period of success for the north London club.

The Frenchman, who now works as FIFA’s Chief of Global Football Development, played a major role in revolutionising English football in terms of scouting, training and nutrition as he became the Gunners’ longest-serving boss in history.

He always remained loyal to Arsenal – turning down offers from Manchester United, Barcelona, Real Madrid and England during his time at the club – and has rejected two Premier League offers since leaving the Gunners.

His legacy, however, was somewhat tarnished in the latter stages of his tenure, with fans growing tired of settling for fourth-placed finishes in the Premier League, and he was forced out the door by the club’s supporters and board.

Wenger left Arsenal in 2018 having taken charge of 1,235 games but did not return to the club until this week – over four years later – due to leaving in such negative circumstances and the pain he felt over his departure.

But current boss Mikel Arteta, one of Wenger’s former captains, was keen for the 73-year-old to return and he was given a joyous reception by Arsenal fans during the 3-1 victory over West Ham on Boxing Day.

Wenger was also pictured back in the home dressing room with Arsenal players following the win and now, according to The Telegraph, the club are plotting to build a statue of him outside the Emirates to celebrate his achievements.

Arsenal already have statues of former players Thierry Henry, Tony Adams and Dennis Bergkamp as well as former boss Herbert Chapman outside the club’s stadium and Wenger was previously said to be against the idea of adding himself.

But Wenger appears to have had a change of heart after his recent return to the Emirates and has now given the green light for the statue to be built, which could be erected as early as 2023.

‘I’ve been involved in the process but it’s about him, the timing he needed,’ Arteta said about Wenger’s return to Arsenal after more than four years.

‘Hopefully he’s going to leave here and be willing to spend more time with us because he is such an influence: for me personally, in my career, the way I see the game, but as well for this football club.’

He’s had a change of heart!