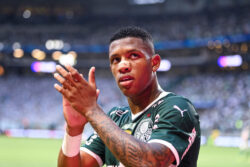 Danilo is back on Arsenal’s radar (Getty)

Arsenal are planning a £26 million bid for Palmeiras midfielder Danilo, according to reports.

The Gunners made a move to sign the 21-year-old during the closing stages of the summer transfer window but the Brazilian club held firm and kept their highly rated midfielder.

Mikel Arteta had also targeted Douglas Luiz but the Brazilian midfielder, who was out of contract next summer, recently signed a new deal with Aston Villa.

According to The Sun, Arsenal have already decided to try again for Danilo in the January window and are planning to launch a £26m offer after the World Cup is over.

The report claims that Arsenal believe Palmeiras could now be willing to sell Danilo once their season ends next month.

The 21-year-old has played a key role in Palmeiras’ recent success, helping the club win two Copa Libertadores titles, the Campeonato Paulista and the Copa do Brasil. He is also set to add the Brazilian Serie A to his honours list as Palmeiras close in on the title.

Speaking after the summer transfer window closed, Palmeiras president Leila Pereira insisted that Danilo would not be sold.

‘I said he wasn’t going to leave and he didn’t,’ said Leila Pereira.

‘I’ll tell you, players of this size, important in the history of Palmeiras, I don’t make decisions alone.

‘I always consult our coach, coaching staff. If my coach says he can’t lose the player under any circumstances, he doesn’t leave.’

The Gunners are ready to make their move.