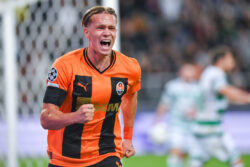 Arsenal have made an improved bid for their key transfer target in January, Mykhailo Mudryk, with the Shakhtar Donetsk winger very keen to make the switch to north London.

The Gunners have already seen one offer for the Ukraine international rejected and there is a pretty substantial difference between that first bid and Shakhtar’s asking price.

The initial bid was reportedly worth an initial £35.5m with £17.7m in add-ons, but the Ukrainians reckon their young talent is worth more like £85m.

A second bid has gone in from Arsenal, as reported by The Guardian, but the value of that offer has not been revealed. Clearly it will be more than the first offer, but it will certainly not be as much as Shakhtar’s desired £85m.

Chelsea are also interested in the winger, who turns 22 this week, but Arsenal are in pole position to sign him, partly because he has made it clear he wants to join the north Londoners.

Mudryk has twice posted pictures on Instagram of him streaming Arsenal games, most recently on New Year’s Eve when he was watching the Gunners beat Brighton 4-2.

He posted a picture of Mikel Arteta and Brighton boss Roberto De Zerbi during the match, labelling the pair, two top coaches. Mudryk worked under the Seagulls manager when he was in charge at Shakhtar.

Arteta has refused to say much at all on Arsenal’s pursuit of Mudryk, but De Zerbi has made it clear what he thinks of the impressive rising star, believing he can climb to the very top of the sport.

‘I like him, because I like all my ex-players,’ he said. ‘But Brighton can’t buy him, Arsenal, I don’t know.

The Gunners are very keen on the Ukrainian.