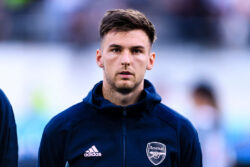 Arsenal defender Kieran Tierney has refused to rule out an emotional return to Celtic after being dropped by Gunners manager Mikel Arteta.

Tierney completed a £25m move to the Emirates Stadium in 2019 after ending his 14-year association with Scottish giants Celtic.

The 25-year-old spent more than a decade in Celtic’s academy before forcing his way into the first-team and helping the club win three league titles.

Tierney, who made 170 appearances for Celtic, also lifted two Scottish Cups and two League Cups during his time in Glasgow.

The Scotland international has been a mainstay in Arsenal’s side over the past two seasons but has found game-time hard to come by this term, starting just three of the Gunners’ 11 Premier League matches.

Tierney has admitted it has ‘been tough’ to find himself on the bench under Arteta and was asked this week whether he could rule out a return to Celtic.

Speaking on BT Sport’s Currie Club podcast, he said: ‘I think when a player who loves the club leaves there’s always that, “what if he comes back” – and you can’t rule anything out.

Earlier in the month, Arsenal legend Martin Keown suggested that Tierney was growing frustrated in north London after being handed a rare start in the Europa League.

‘I feel sorry for him,’ Keown told BT Sport after Arsenal beat Bodo/Glimt at the Emirates. ‘He’s a high-calibre player and he comes on in every game.

‘But obviously you’re not completely meeting his needs. It shows you the quality and strength of the squad when he’s not starting. You want to have that competition and the level gets higher.

‘Whether or not these players accept that going forward… I don’t know. As long as they play like that when they come in, I think there’s a future there for them.’

Tierney, meanwhile, admits it has been difficult to take a watching brief for much of the season, with Arsenal thriving under Arteta and climbing to the top of the Premier League.

‘It’s been tough,’ Tierney said when asked to assess the opening quarter of the season.

‘I missed pre-season coming back from an injury, and the first game I played in was the Palace one – that was the first week of training that I had.

‘I’ve just been trying to get minutes here and there so it’s been a tough start, but whether I’m first, second or third-choice, I’m just going to keep working hard and see where it takes me.’