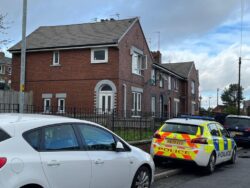 Officers were scrambled to Shakespeare Road in Oldham, Greater Manchester, to reports of a dog attack at around 10am on Saturday (Picture: MEN Media)

Armed police shot a dangerous dog after it escaped from a home and attacked two women in the street.

They were scrambled to Shakespeare Road in Oldham where the ‘aggressive’ animal went on a rampage at around 10am on Saturday.

The two victims were rushed to hospital with serious but non-life-threatening injuries.

Greater Manchester Police said the officers were forced to kill the dog ‘due o he number of people in the area and the injuries caused’.

It has not yet been confirmed what breed it was.

A 29-year-old man was arrested under the Dangerous Dogs Act.

An investigation into the incident is under way.

A GMP spokesperson said: ‘This morning at around 10am officers were called to reports of a dangerous dog that had attacked two people in the Shakespeare Road area of Oldham.

‘Officers attended the scene and two women had been attacked by a dog which is believed to have escaped from a property and was acting in an aggressive manner.

‘Both women have been taken to hospital to receive treatment for injuries that are serious but not believed to be life-threatening.


‘Specialist armed officers attended, and unfortunately due to the nature of the incident, the dog was destroyed as a safety precaution due to the number of people in the area and the injuries caused.

‘A 29-year-old man has been arrested at the scene for allowing a dog to be dangerously out of control injuring any person under the Dangerous Dogs Act 1991. A scene remains in place and enquiries are ongoing.’

The two victims were rushed to hospital with serious but non-life-threatening injuries.