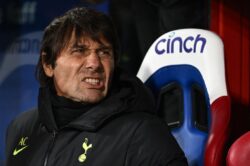 Antonio Conte is going through a sticky patch at Spurs (Picture: Getty Images)

Antonio Conte is playing a ‘dangerous game’ at Tottenham by pushing for more signings, warns Graeme Souness, while Jamie Redknapp says his current players may not want to hear the messages from their manager.

The Italian is keen for Spurs chairman Daniel Levy to invest in the squad this month, and likely again in the summer as he tries to transform the side into title challengers.

Among a number of messages to his boss, Conte told BBC Five Live: ‘The level now is very, very high and the level improved because Manchester United invested a lot of money and they already had important players and then put other players. Chelsea did the same, Manchester City did the same and Arsenal did the same.

‘You always see one following the others. Also if you invest £50m or £60m then the other arrives with a bazooka and you only have a little gun compared to their bazooka.’

Souness, who played for Tottenham and went on to become a Liverpool legend, is a fan of Conte, but has warned him that it is chairmen, more than managers, who get their way.

‘He’s had two transfer windows, this will be the third, that’s premature to criticise him for the way they play, he’s dug out results.

‘We all know the nature of the game, if you’re a big football club and not winning games, not deemed to be playing the correct way.

He is a serial winner, the stats would tell you that, but it’s a dangerous tactic he’s employing at this time and generally there’s only one winner and it’s the guys who make the decisions above him.’

Redknapp, who also played for Spurs and Liverpool, also believes that players can be negatively hit by their manager pushing for more signings.

‘I think he wants a bit more depth to the squad, because when you saw them at the weekend without Bentancur and Kulusevski they looked weak, they don’t have that quality they want in the squad,’ said the former England midfielder.

‘I can see his frustration, but it felt, listening to him and at the weekend, every press conference has a sort of message in it

‘It’s not always the best when you’re a player and you’re in that kind of environment.’

‘It’s not always the best when you’re a player and you’re in that kind of environment.’